The Browns looked electric in their 30-10 win over the Washington Redskins in front of a sell-out crowd. Even though everyone needs to temper their expectations because it’s preseason, there was a lot to be excited about during that game. The stars were as advertised in limited reps, the rookies balled out, and there was even an unforgettable, storybook moment. We’re only one week into the preseason and this team already feels special. Of course, they need to clean up a few things, namely ball security, but there was so much for Browns fans to cheer for, and there were definitely some standouts in the Cleveland Browns’ wild win. 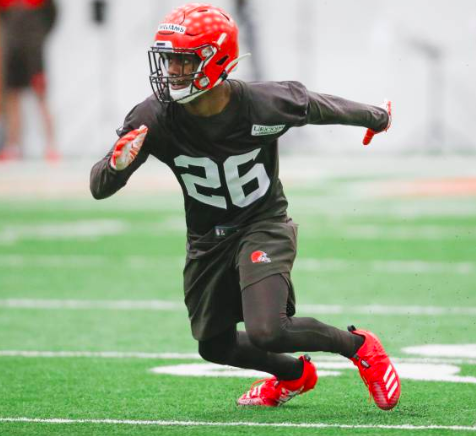 Greedy may have had a rough start as he was involved in the blown coverage with Sheldrick Redwine that gave up the only touchdown allowed by the Browns all night, but he recovered well after that. Greedy made a couple plays in the run game, which was great to see considering his biggest knock coming out of college might have been tackling. He also had an interception, which should be the first of many as he battles for a starting cornerback spot along side Denzel Ward.

Reports have come out of camp this offseason that Takitaki played with so much intensity and physicality that he was being yelled at to take it down a notch. He definitely lived up to that bill as he played with a ton of energy all game long. However, sometimes this caused him to overshoot his gaps and it got him out of position to make a tackle on special teams early in the game. For the most part though, Takitaki looked pretty good overall because he showed some ability to blitz and tackle in the open field. This guy definitely plays hard, and as he gets more experience, he definitely showed the potential to develop into a nice player – once he puts it all together.

I’ll keep this one short because they didn’t get many reps, and we pretty much all expected these guys to shine. All three of these blue-chip young stars showed out in their limited playtime. Baker dominated the Redskins defense as he completed 5/6 passes for 77 yards and capped off his only drive with a 24-yard strike to Rashard Higgins for a Browns touchdown. Nick Chubb looked fantastic with his only two touches going for a combined 26 yards where he showed his ability as both a runner and pass-catcher. Chubb should have a monster breakout season as the workhorse out of the backfield. Also, a 10-pound-lighter Myles Garrett looked literally unstoppable in the few snaps he played. He had a pressure, made a play in the run game, and he seemed to get held just about every play because that’s the only way to slow him down. Good luck trying to keep him out of the backfield this year.

Rashard Higgins gets better each and every year, so I expected to see an improvement, but I didn’t expect to see him look as phenomenal as he did. Higgins was the Browns leading receiver with five catches for 98 yards and a touchdown, but he really should have had more. The guy was open on almost every play and he was easily creating separation throughout the game. Beyond the nice touchdown catch from Baker, Higgins had a beautiful 38-yard catch and run from Drew Stanton where he made a defender miss in the open field and came up just short of the end zone for a second time, and he even had another 21-yard reception from Garrett Gilbert. Bottom line is that Higgins could make big plays no matter who was in because he was getting himself that open, so hopefully, this is a trend that continues into the regular season. If so, everyone should expect a huge year from Higgins and he will definitely make himself some money free agency impending.

John Dorsey owns the fifth round! Mack Wilson came up with two interceptions including a pick-six off rookie quarterback Dwayne Haskins Jr. Mack Wilson was incredible all night in coverage routinely showing off his elite instincts against the pass. Wilson also had a couple of really well-executed blitzes, which helped showcase his versatility and athleticism. He needs to work on getting stronger and shedding blocks before he can be a star, but he has a ton of potential. Wilson has a real natural ability to read the quarterback that will give him plenty of opportunities to play and succeed in the NFL and he has to continue to get better at everything else in order to become a star.

Freddie Kitchens said that he would like to keep three quarterbacks on the roster, so there’s an opportunity for roster spots behind Baker. While Drew Stanton struggled, Garrett Gilbert actually had a pretty great game. He started out shaky with two straight three and outs, but then he started getting into a nice rhythm with Antonio Calloway, and he found Higgins for a big play. He was able to work in the middle of the field, find soft spots in the zone, and he even put some balls on the money toward the sideline. Gilbert made some NFL throws, and if he can keep that up, he will be more than capable of being the backup quarterback come week one.

Damon Sheehy-Guiseppi is one of the best stories of the preseason so far because he was a JUCO player with no offers, so he decided to take his blazing speed to the professional ranks. He couldn’t get a contract offer at a CFL tryout, and then he eventually talked his way into a NFL tryout and slept at a 24-hour gym every night until he earned a spot on the 90-man roster for the Browns. Sheehy-Guiseppi has become an internet sensation overnight because his incredible story garnered attention after his 86-yard punt return touchdown. The entire team proceeded to all jump on top of the return man as he laid down in the end zone, which is a moment he will never forget. Everyone should be pulling for him to make the team because he is the ultimate underdog and every Cleveland Browns fan has a soft spot for an electric return man.

A nice surprise toward the end of the game was how good DJ Montgomery looked on both of his receptions in the fourth quarter. One of those even resulted in a touchdown, and there should definitely be some credit given to David Blough for making two good throws to Montgomery and being willing to challenge the defense. On Montgomery’s first catch, Blough threw a jump ball down the left side where the rookie receiver was able to high point the ball nicely and haul it in for a tough contested catch for a 35 yard gain. Later on in the drive, Blough threw a beautiful back-shoulder pass, and Montgomery made a fantastic adjustment to catch the ball underneath the cornerback for the touchdown. It’s an uphill battle for a roster spot for each of them, but if they keep showing out like this, then they definitely deserve a practice squad spot.