Since the signing of Admir Suljevic (covered here), the Cleveland Crunch have added three more players to the roster. First up is Akron native Ma’Cain Spragling. The 26-year-old forward spent his early days playing for the Cleveland Internationals Academy and Brush High School. While in high school, he earned Honorable Mention for soccer in 2010 and 2011. In 2012, Ma’Cain was named First-Team All-League and Most Valuable Player. He capped off his 2012 season by leading his team in assists. 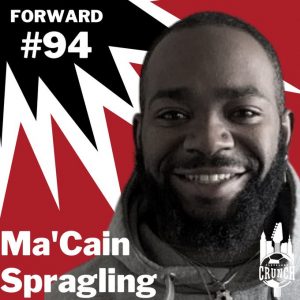 His college career covered three different schools, Lakeland Community College, Onondaga Community College and the State University of New York at Cortland (SUNY Cortland). While with the Lakers of Lakeland CC, Spragling scored six goals and assisted on two others. Moving on to Onondaga CC, he had a very successful 2015 season. That year, he scored eight times while providing another 10 assists. Spragling’s eight goals led the team. The season culminated with his selection to the All-MSAC First Team while leading the Lakers to its first conference championship in school history. He wrapped up his collegiate career with SUNY Cortland, where he was named a two-time All-SUNYAC first-team selection. Spragling helped lead the Red Dragons to a 19-3 record and an appearance in the Sweet 16 during the 2017 NCAA Tournament.

After college, Spragling remained active in soccer, playing both semi-professional and professional leagues. He played one season with Syracuse FC of the National Premier Soccer League (NPSL). After his time in Syracuse, he signed with the San Diego Sockers 2 of the Major Arena Soccer League 2 (M2) for the 2018-19 season. During his time in San Diego, the Sockers won the M2 Championship after completing a perfect 12-0 season. Eventually, he landed in the Major Arena Soccer League with the Mesquite Outlaws for the 2019-20 season.

The Crunch expect Spragling to bring experience and excitement to the team. We’ll be covering Spragling and his exploits with the team next season when the newly-formed Crunch embark on its maiden voyage.

After the signing of Ma’Cain Spragling, the team announced the signing of midfielder Kurt Raney. The Cleveland native starred for the Mentor High Cardinals where he was a four-year letterman and a three-year starter. Raney was his team’s leader offensively, excelling as a playmaker. His efforts helped lead the Cardinals to an appearance in the D1 State Championship game. As a senior, Raney was named to the All-Greater Cleveland First Team. While also earning an All-Ohio Second-Team selection. 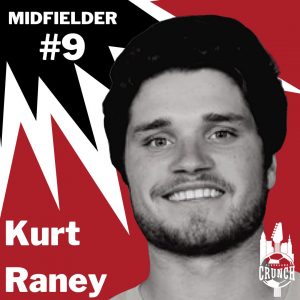 In college, Raney played one season for the Cleveland State Vikings before transferring to Baldwin Wallace University (BW). While at BW, the team named him captain during his three years as a starter. He capped off a successful stint with the Yellow Jackets by earning Co-Offensive Player of the Year and having the Ohio Collegiate Soccer Association name him to its All-Ohio Third Team.

Moving on to the semi-professional/professional ranks, Raney signed with the Dayton Dutch Lions of the United Soccer League 2. He started all 14 games for the club and led them in scoring. Following his time there, he joined Cleveland SC of the National Premier Soccer League (NPSL). As a member of Cleveland SC, he won the NPSL Regional Championship and made an NPSL National semi-finals appearance in 2019.

The Crunch are hoping that the 23-year-old’s playmaking abilities and winning pedigree help the club successfully navigate its inaugural season.

Check back later this week for more news on signings and this weekend’s tryout!

*Images used with the permission of the Cleveland Crunch.