Sportico recently crunched the numbers on the top one-hundred most watched television broadcasts in the U.S. during 2022. 82 of them were NFL games. Of the top 33 broadcasts, only TWO were not NFL games. 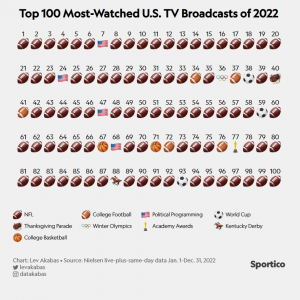 What does this say, beyond the fact that we love watching the “spectacle of violence,” as former linebacker Chris Borland put it? What does this say about the business of football? The advent of legal sports gambling has magnified the manipulations of these supposedly honest competitions, on top of creating a whole demographic of wheelers and dealers who imagine themselves chomping cigars in a dimly-lit backroom shuffling money around.

Although rumors of NFL games being rigged have recently picked up in the mainstream, those of us who understand history and how business works have suspected this for years; years before their own money was at stake through platforms like FanDuel, DraftKings and Bet MGM. In fact, it was proven in a federal court of law that the NFL has no obligation to prevent cheating or rigging of its contests.

In 2010, a disgruntled New York Jets fan, Carl Mayer, brought individual and class claims on behalf of season-ticket holders against the NFL following the “Spygate” scandal.

“Spygate” involved a New England Patriots employee caught videotaping signals given by the Jets coaches on the sidelines during a September 2007 game at Giants Stadium, a clear violation of NFL conduct. Mayer alleged that Belichick had used this scheme since he became the Patriots head coach in 2000, and brought charges under federal racketeering laws, state laws on deceptive business practices, and consumer protection laws.

He also alleged that the NFL’s destruction of the videotapes constituted a breach of contract.

The Third Circuit Court of Appeals’ response? The NFL, as a singular entertainment enterprise, has a legal right to fix the outcome of ANY of its games, including the Super Bowl, because Mayer’s ticket only guarantees a seat at a stadium to watch an NFL game.

As long as that is satisfied, the NFL saddles no further obligation to ticket holders and has every legal right to fix games for entertainment purposes.

The league is not comprised of 32 separate NFL franchises, where each team is run as separate businesses, but rather as one collective entertainment business. This allows the NFL to market all 32 teams to the major TV networks nationwide.

Now that we understand the NFL is not legally classified as a “sport,” and instead “entertainment,” let’s return to the ratings. According to Sportico, the NFL served up 171.3 billion TV ad impressions in 2022. What does this mean exactly?

The networks: CBS, NBC, FOX, and ESPN pay the NFL to broadcast their games. These contracts amount to hundreds of billions of dollars given to the league through TV contracts every season. How do the networks profit? Companies such as Budweiser, TMobile, Subway and several others pay them to advertise their products. Success under this business model depends on one thing: ratings.

The money made from TV contracts is dolled out amongst the 32 teams, and goes to pay players’ salaries, executives, front office and other team expenses.

So what business is the NFL and its advertising partners actually in? It sure as hell isn’t football. There are two other professional sports that share the legal title of “sports entertainment:” the WWE and professional roller derby.

When you understand how the NFL makes its bread, it’s easy to explain the ridiculous one-handed catches from receivers using proven magnet technology, the inexplicably high amount of overtime games and last-second finishes, and the soap opera comebacks from 27 points down in the second half. The NFL is a TV show with weekly episodes.

Any of my favorite TV shows contain drama, intriguing main characters who are likeable, villains whom we love to see fail, shocking left turns, polarizing moments that stir up debate, and edge-of-your-seat finishes. Today’s professional football players are more like movie stars than athletes.

Now, the birth of legal sports betting in several states has amplified this issue. The NFL has overtly partnered itself with sportsbooks like FanDuel and DraftKings, and it seems hellbent shoving it down everyone’s throat whether they even like sports or not.

Everywhere you turn are promotions for these sportsbooks with the NFL logo stamped alongside it. “Bet $5 and get $100 in FREE bets!” Anyone who was told “it’s too good to be true” as a kid would then ask, “what’s the catch?”

The catch is that the games are rigged to make the sportsbooks more money than they pay out. Anybody who’s spent time in a casino understands this basic rule: the house always wins. Of course, you may find success in the short-term on a few wagers here and there. But in general, the house comes out on top.

In September 2022, the AGA revealed that over $50 billion had already been wagered on NFL games, and this was before millions of folks were legally allowed to in Ohio and other states.

Here’s the bottom line: sportsbooks are not charities; they are businesses. If you think sportsbooks would leave a billion-dollar industry up to chance, you don’t know business. Period.

Games are routinely manipulated to go against the public bets on the spread, money line and over/under total points. Author Dan Moldea of the 1989 book “Interference: How Organized Crime Influences Professional Football” documented the decades-long evidence of point shaving in NFL games.

Brian Tuohy, author of “The Fix Is In: The Showbiz Manipulations of the NFL, MLB, NBA, NHL and NASCAR,” documented the revenue sharing and anti-trust exemptions the NFL possesses and the influence of gambling on professional sports.

An example: in Super Bowl 56 between the Rams and Bengals, a whopping 83% of the money wagered on the money line bet was placed on the Bengals. The 17% who bet on Los Angeles received half of what they wagered in profit with -200 odds.

On the spread bet, 74% of the money wagered on LA -4 went to the Rams to cover, meaning to win by more than four points. Of course, the Bengals only lost by three points, meaning Vegas cashed out big time.

And if you think that players would come out and blow the whistle on such a grand “conspiracy theory” which is actually documented with proven facts and history, look again: several players HAVE, in fact, spoken out.

Benny Cunningham, former Bears running back, tweeted: “The NFL is scripted but they make us sign something so we can’t go into detail… Tired of holding back… who want the real story.”

Junior Galette, a former Pro Bowl linebacker for the Saints, tweeted in response to the ESPN’s hype for the 2021 Super Bowl: “Hollywood couldn’t write a better script lol The New Face of the NFL vs the OLD one. I can’t believe I used to put my body and mental health on the line for a Game that’s scripted.”

Chris Borland, former linebacker who retired after just one season, stated: “The NFL is like a spectacle of violence, for entertainment, and you’re the actors in it. You’re complicit in that. You put on the uniform. And it’s a trivial thing at its core. It’s make-believe, really. That’s the truth about it.”

Earl Campbell, retired Houston Oilers running back and Hall of Famer, said: “And we all know, now that we’re grown men, that wrestling’s fake. Well, football is not played like it was when I played.”

And the crown jewel of them all: former Super Bowl MVP LB Dwight Smith of the Buccaneers, calling into a local sports talk show ahead of the Brady-Mahomes Super Bowl:

“The game ain’t decided on the field. It will be whatever Vegas wants; whatever makes them the most money. [In the 2003 Super Bowl], we knew every play they were running before the game even started. [Oakland] didn’t run that offense all year.”

With the rise of legal betting everywhere backed by their own stamp of approval, expect the National Fixed League to hum along just fine, consuming your emotions and money with it.

Armed with highly-trained and tested journalism skills, I seek to strike the heart of Cleveland sports teams’ flaws, with a particular emphasis on the Jimmy Haslam-led Browns. It is my duty as a journalist to be confrontational in my writing, not to be a PR spokesperson for the team.

Jim Schwartz The Real Deal; Should Demand That “Dino Dolls” Myles Garrett is TRADED This Offseason

2 thoughts on “Rigged NFL: Stop Buying Into, Emotionally and Financially, The TV-Style Drama Of The National Fixed League”