It is refreshing, recalling what happens next. But it was tense and stressful in the spur of the moment. This will be a play that overshadows the entire season, every thing that led to this point. So, it is time to take a look back and rewind.

The Cavaliers finished the season with a solid 57-25 record, allowing them to take the top seed in the East. However, the Cavaliers faced turmoil at their helm, with head coach David Blatt being fired. There were accusations that Blatt refused to criticize his Big Three and a lack of ability to win over his locker room led to him being fired. He was replaced by Tyronn Lue. Tyronn Lue had been here before, excelling in the 2001 playoffs with the Lakers as a player, but this is his first coaching job. Lue was the Cavs assistant coach for the previous two seasons, and had guided the Cavs to this point. After sweeping the Pistons and Hawks, the Cavaliers beat the Toronto Raptors in six games.

The Warriors had a far different path to get to this point. The high-flying, record-setting, fast-paced Warriors set the NBA record for wins in a season with 73. This was just one of 25 NBA records that were broken in the season. The Warriors won their first 24 games. Steve Kerr won Coach of the Year. The Warriors had three all-stars, Stephen Curry, Klay Thompson, and Draymond Green. Curry, who hit 402 3-pointers, became the first unanimous MVP ever. All of this happened even though Kerr missed the first 43 games of the year due to a back injury. However, the playoffs were far less easy for the Warriors. They breezed through the first two rounds in five games, but the Oklahoma City Thunder posed a much greater challenge. The third seeded Thunder put the Warriors into a 3-1 hole. The Warriors won Game six after Klay Thompson scored 41 points and hit an NBA playoff record eleven three-pointers. In Game seven, the Warriors trailed by as many as thirteen points, but rallied thanks to a huge third quarter and won the series, becoming just the tenth team to ever come back from a 3-1 deficit. 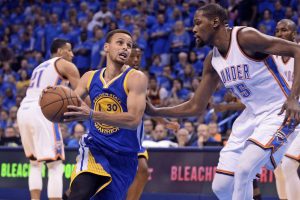 In Game five, Draymond Green was suspended due to an altercation with LeBron James in the previous game. James and Kyrie Irving each scored 41 to extend the series, and send it back to Cleveland. After the game, Green said that LeBron only scored 41 because he wasn’t guarding him.

In Game six, with Draymond Green covering him, LeBron James scored 41 points again. The Warriors got off to a horrible start, the Cavaliers led by 20 after the first quarter, and never looked back. Stephen Curry was ejected for the first time in his career, Steve Kerr was fined 25K for criticizing the officials, and all the momentum was on the Cavaliers side. They became the first team in 50 years to force Game seven after trailing 3-1 in the series. 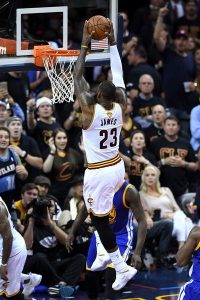 Game seven. One game to decide the season.

The Warriors got off to a hot start and led 49-42 at the half. However, no one could stop LeBron James and he had willed the Cavaliers back into this game. The Cavaliers closed the gap to just one point going into the 4th quarter, and the score was tied at 89 with four minutes to play after Klay Thompson hit a layup. This game has featured 20 lead changes and eleven ties. This game has stayed scoreless for the last two minutes, taking it to this point.

“Iguodala to Curry back to Iguodala, up for the layup, OH BLOCKED BY JAMES”

The Cavaliers won Game Seven after Kyrie Irving hit a three-pointer over Stephen Curry, but that block defined the game, the series, the season, and the career of LeBron James.