Relocation has become more common than ever before with the Chargers, Rams and Raiders all relocating in the last five seasons. The idea of relocation is something that hits close to home with Browns fans with the original Browns relocating to Baltimore, leaving the city of Cleveland without a team for three seasons.

This has hurt countless fans from St. Louis, San Diego and Oakland. The Rams and Chargers have suffered from poor attendance in their new cities, so why do they do it? What are some feelings from fans who had their team taken away?

Money is almost always the reason why teams move, whether it’s that the owners wanted a new stadium and their city didn’t want to raise taxes to build one, or if it is that the owner wanted to increase the value of the team. The NFL tries to discourage relocation by enforcing a fee of several hundred million dollars. The Chargers and Rams each paid 645 million, while the Raiders got off relatively well with a 385 million dollar fee.

The excitement that comes with relocation for one city leads to sadness for another. Cleveland experienced that feeling when Art Modell made the announcement that the Browns would be stripped from the city and taken to Baltimore, due to Cleveland being unwilling to build a new stadium.

Zach Shafron, founder and CEO of Cleveland Sports Talk wanted to speak about his and other fans’ feelings of the move. Here are his thoughts:

The Browns leaving Cleveland was an absolute gut-punch to the entire city. Fans were completely disgusted with then-owner Art Modell for picking up the team and moving them to Baltimore. After all, football was the heartbeat of this town and the people lived for the Browns. Additionally, this city had a rich history of football with names such as Jim Brown and Otto Graham playing for the Browns. Thankfully, the new bunch in Baltimore was named the Ravens and the Browns got to keep their identity here in Cleveland.

When the team returned in 1999, everyone was very excited that the Browns were back. Unfortunately, that expansion team was not very good. In reality, besides a playoff appearance in 2002, there hasn’t been much to cheer about even to the present day. One would have to wonder if the team never left Cleveland in the first place if the franchise would have had more success throughout the more recent years as the Ravens have in Baltimore. Sadly, we will never know… 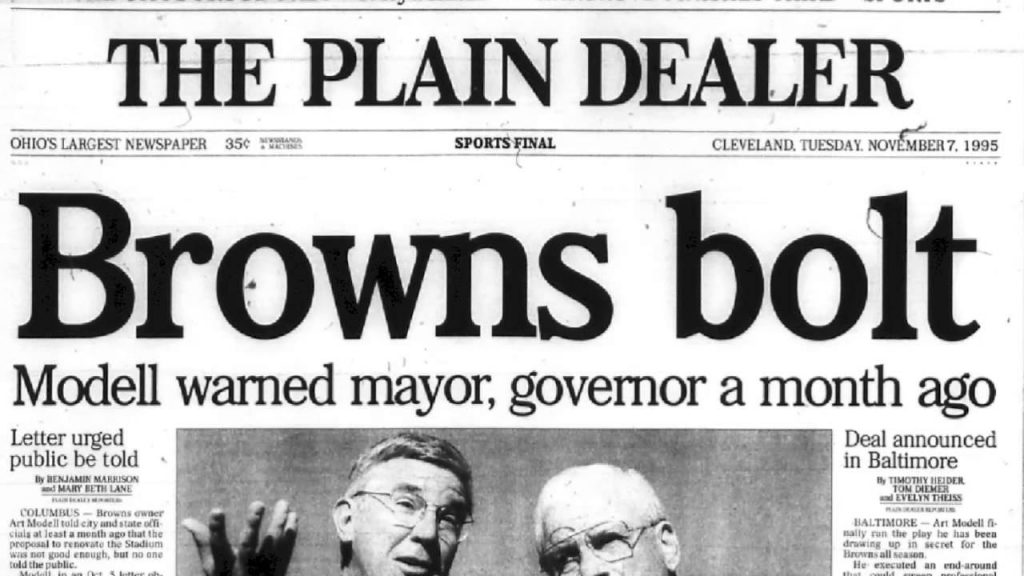 Sam Evans, staff writer at CST, and a San Diegan wanted to speak his thoughts:

It has been both bittersweet to see the lack of fans the Chargers have in Los Angeles. I remember when my city had a team that we could unite around, a team that we could all come together for, rather than having everyone have their own team (there aren’t many Browns fans in Southern California). On the other hand, it is very funny to look at an owner that stole a team from your city and then see him become the laughingstock of the league.

I don’t know what it has been like for people from St. Louis or Oakland, though I can’t imagine that it has been easy. When a team that I loved, a team that was drawing fans, a team that has been a part of your life for so long, or even all of it for many people, when that gets taken away, thanks to no fault of their own, that is painful.

It just sucks. There is no other way to say it.

The fans definitely don’t enjoy when the team moves, the players don’t seem to either. Philip Rivers, one of the few LA Chargers who played in San Diego, talked about how he missed having fans, he missed home games. No one enjoys relocations, other than the already rich owners.

One major difference between the relocations of the Chargers and Browns is that the Browns name was left in Cleveland, the Chargers name was not left in San Diego. The “San Diego Super Chargers” had been in the city for nearly 55 years. It isn’t fun to hear announcers or players talk about the Chargers as LA’s team. It causes me pain whenever I hear it and I wish the Chargers had left their name just like the Browns.

Stan Kroenke, Dean Spanos and Al Davis made business decisions with their teams. Art Modell did the same. The world would be better if they thought about what their “business” means to us, the fans. Relocation is, and always will be a tough part of sports. It’s especially tough when there is no light at the end of the tunnel.

My Thoughts on the Astros Cheating Scandal