Are you frustrated? This season for the Cleveland Browns has been a huge disappointment after only six weeks. This hugely talented team has been psyched out this season from winning and this growing problem continues to expand and fans of the team have had enough.

As a lifelong fan, like many of you, we can look at all this and chalk it up to the Browns just being the Browns and in the end maybe that’s the bigger issue with this organization in this era. Despite all the various regimes that have come and gone, it’s still the same issues.

The coaches can’t coach, the players aren’t trying and they’ve forgotten how to tackle and it’s just the same debacle every week.

What’s leading to this annual event and when will this ever change? You want to think things will be different. It’s an addiction you just can’t part ways with even though it would probably help your health.

While things aren’t likely to change for Cleveland anytime soon, here are five things that would be unique and just maybe help this team get back to at least get one more win.

The First Way: Get Angry 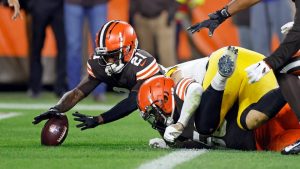 The lack of energy from the players is growing more obvious by the week. No one wants to lose but half the battle is showing up and acting like you’re excited to play on Sundays. None of the Browns after games seem overly upset or angry. Cleveland coach Kevin Stefanski doesn’t ever get angry either. It’s not that we as fans want to see players and coaches always pissed off all the time but a bit more energy could at least demonstrate some more passion and concern for the moment.