The NFL season is nearly upon us. With the first game on September 8th nearly upon us, now is the time to cast your NFL season predictions. This series will be split into eight segments for each NFL division. I will take the schedule, notable additions and losses (both as players and coaches) player history and game locations into consideration when predicting each team’s win/loss record. With that being said, please keep in mind that this is just my opinion. The NFL is incredibly competitive and difficult to predict. 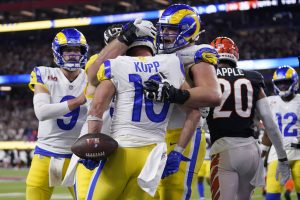 To the shock of no one, the defending Super Bowl champions check in at number one in the west. The Rams bring back all the pieces necessary to make another run at the Super Bowl in 2022. With elite talents such as Mathew Stafford, Cooper Kupp, Aaron Donald and Jalen Ramsey returning, the Rams figure to be just as good as they were a year ago.

Even though the Rams had to pay a premium to retain talent, they found a way to add more top-end talent. Even after the loss of Robert Woods, Odell Beckham Jr. and Von Miller, there is little reason to panic. Von Miller undoubtedly put the LA defense over the top, but even with his absence, LA should be just fine. Specifically, the addition of linebacker Bobby Wagner should be enormous for the defense. The high-IQ veteran has long been one of the best linebackers in the NFL. The addition of his presence should benefit the defense greatly.

Though it would be nice to have a healthy Robert Woods and Odell Beckham Jr. on the roster still, a consolation prize of Allen Robinson is fantastic. Though Robinson struggled with consistency with Chicago, he should greatly benefit from playing with the likes of Stafford and Kupp. Not to mention an offensive-minded coach in McVay.

All of this to say, it will not be easy for the defending champions. The Rams hold the league’s toughest schedule and it starts immediately with the Buffalo Bills. The west is loaded with great teams, but the experience and premium talent will push the Rams over the rest of the pack. 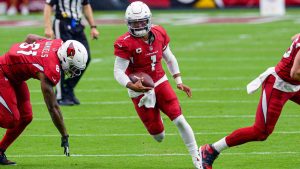 It’s been impossible to ignore the noisy offseason in Arizona. One that is a tough look and hardly makes sense from the outside looking in. While extending franchise quarterback Kyler Murray, it became publicly embarrassing for the star. The front office made public many of the incentives to Kyler’s contract, which cast a light on their QB that any franchise player would be frustrated with. Typically front office’s do everything in their power to keep their stars happy. It will be interesting to see if this forms any sort of divide between the two parties or if they can move on in their relationship.

Despite the noise surrounding the front office and their young star QB, I fully expect the Cardinals to compete with just about any team. I don’t expect the loss of Christian Kirk to be felt. There are enough weapons around Kyler for the offense to be dangerous again in 2022. DeAndre Hopkins, Rondale Moore, Marquise Brown form one of the best quartets in the NFL. The Cardinals also host a great trio of tight ends in Zach Ertz, Maxx Williams and rookie Trey McBride.

Meanwhile, the defense took a big hit with the loss of Chandler Jones, who was easily their best defender. It puts a big burden on J.J. Watt to carry that extra burden. One that hardly seems likely given his ability to stay on the field. Watt has missed 42 games over the course of the last six years.

Unfortunately for Arizona fans, I expect this season to be much like last season. Expect Arizona to get out to a fast start, looking like one of the best teams in the NFL. Come later in the season this team has not performed to the same level. I expect that to continue and with the league’s second-toughest schedule, it will likely wear on them late. Arizona should at least be a wild card team and from there, anything can happen. 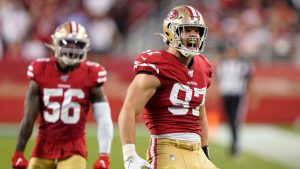 The future is now for San Francisco. The organization has opted to make second-year QB Trey Lance the starting quarterback. The team has also decided to keep veteran QB Jimmy Garoppolo, agreeing to restructure his contract. This can be viewed in two ways. In one light, it is a great contingency plan should things go south with Lance. The young signal-caller has reportedly struggled with accuracy and consistency throughout fall camp and preseason. In another light, it could become troubling should Lance struggle and start looking over his shoulder.

The great news is that regardless of who lines up under center, they still have their top weapon. There was much speculation about a possible trade involving their star receiver Deebo Samuel. But after agreeing to a new extension, it appears that Samuel will be around for a while longer.

Likewise, the 49ers return a great unit on defense. They had the ninth-ranked scoring defense and allowed the third-fewest yards of any team last year. Adding a great talent in cornerback Charvarius Ward through free agency should only improve the defense more.

A very difficult division and a questionable QB situation may allow the Cardinals to sneak past them in the division. But the incredible amount of talent and great coaching will make them a contender to still make the playoffs. 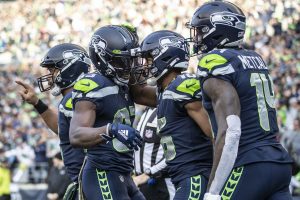 A new era begins in Seattle. The loss of disgruntled star QB and former Super Bowl champion Russell Wilson will be felt immediately. Playing in the NFC West is already reason enough to expect them to struggle. But with the league’s worst QB room and a clear intention to rebuild through the draft paint a clear picture for 2022.

Seattle still boast great receivers with D.K. Metcalf and Tyler Lockett but neither Geno Smith nor Drew Lock inspire confidence in a great passing game. The addition of rookie running back Ken Walker III could be great long-term, as he was borderline sensational with Michigan State last season.

Intentions were also made very clear with the team deciding to cut the multiple-time all-star linebacker Bobby Wagner. Though not without talent, as the defense still boasts the likes of Jamal Adams, Quandre Diggs and Jordyn Brooks as solid to great players. However, the rest of the defense does not appear to live up to those expectations.

It wouldn’t be surprising to see Seattle move on from a few more proven veterans that no longer match their timeline, to acquire assets and draft compensation. There are nice pieces on this roster, but the front office has made it quite clear what the objective will be in 2022. The players will no doubt play to win but have unfortunately been set up for failure this season. And with the loss of Wilson, this appears to be the correct move, even though it becomes tough for fans to enjoy in the present.

This concludes my preview series covering each NFL division. Leave a comment to let me know what you thought. Share your thoughts and predictions as well. Let me know if you would like a series at the end of the season where I cover where I was right and where I was wrong. Enjoy the 2022 season; it’s finally here!