The NFL season is nearly upon us. With the first game on September 8th nearly here, now is the time to cast your NFL season predictions. This series will be split into eight segments for each NFL division. I will take the schedule, notable additions and losses   both as players and coaches) player history and game locations into consideration when predicting each team’s win/loss record. With that being said, please keep in mind that this is just my opinion. The NFL is incredibly competitive and difficult to predict. 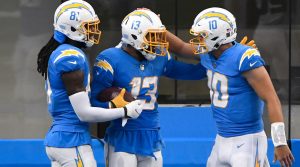 Among the list of teams expected to make a big jump are the Los Angeles Chargers. After going 9-8 a year ago, they find themselves right in the mix of being a division leader in arguably, the most difficult division in the NFL. If not for the defensive collapse suffered in the last three games of the season, the Chargers very well could have been an 11 or 12-win team.

The offense largely remains the same. The Chargers are of course headlined by Justin Herbert, who had a tremendous sophomore campaign. Herbert threw for 5,014 yards, 38 touchdowns, 15 interceptions on a 65.9% completion percentage and a 97.7 QBR. The jump in play for Herbert is a large part of the believed contention for the Chargers. If he can repeat that performance again, they will be right in the mix to win the division. Additionally, they return one of the best trio of weapons around Herbert with Keenan Allen, Mike Williams and Austin Ekeler. Production should not be hard to come by for the Chargers.

The defense has had talent, but it hasn’t been easy putting it together. The Chargers ranked 30th in defense a year ago. Health and roster upgrades are the hope for a better result in 2022. For a defense that already held superstars in edge rusher Joey Bosa and safety Derwin James. Adding two more stars in edge rusher Khalil Mack and corner J.C. Jackson is plenty of reason for optimism for improvement.

In brief, if the defense can match the offense more consistently, the Chargers will be among the best teams in the NFL. 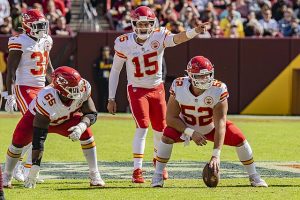 Second on this list welcomes the Kansas City Chiefs. The Chiefs have lost a considerable amount of talent, with more question marks than usual for such a stable franchise. Losing proven veterans such as Tyreke Hill, Tyrann Mathieu and Charvarius Ward is sure to sting. Kansas City will need the free agents and draft picks to hit if they are to remain atop the behemoth that is the AFC West.

The greatest argument to be made for the Chiefs is obvious. Head coach Andy Reid and superstar quarterback Patrick Mahomes. Mahomes has been arguably the best quarterback in the NFL since his second year in the league. The former MVP will have his work cut out for himself with the loss of his speedy receiver Tyreke Hill. Fortunately, he does still have the league’s best tight end in Travis Kelce. If the offense is to keep pace, they will need JuJu Smith-Schuster, Mecole Hardman and former Packer Marquez Valdes-Scantling to pick up the slack.

Defensively, they have more question marks with the loss of Mathieu and Ward. This doesn’t fair well when considering this is a team that has stereotypically struggled to stop opposing offenses ( despite improving to the 8th ranked defense a year ago ). The Chiefs will be hoping that rookie edge rusher George Karlaftis will enhance their pass rush. Karlaftis is quite the talent, going under the radar at Purdue, but even so, that may be asking a bit much for a first-year player.

Ultimately, determining the Chiefs’ placement is heavily influenced by the degree to which you believe in their head coach and quarterback. They have been exceptional every year that they have been together, but with the loss of talent and the surge of talent in the AFC West, 12 wins might be the ceiling for this club. 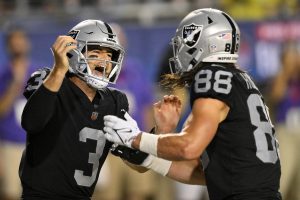 The beginning of the season may be rough for the Raiders. But they should be able to make a strong push for contention as the season goes on. But with the highly respected mind of head coach Josh McDaniels and the bevy of talent at his disposal, the Raiders will be difficult to stop.

Derek Carr will have plenty of weapons at his disposal in 2022. Returning running back Josh Jacobs, receiver Hunter Renfrow and tight end Darren Waller was enough to help make Vegas a 10-win team a year ago. Now, Carr has a dominant weapon to add to his arsenal with the former Packer, Devante Adams joining Vegas this off-season.

The Raiders do need to improve defensively. With a ranking at 26 in the league a year ago, it does leave a little to be desired. Especially when looking at the opposing AFC West offenses they will be asked to stop. Adding Chandler Jones is sure to help, as the former Cardinal has compiled 107.5 sacks over his 11-year career. Still, the Raiders will remain a bit thin in depth and very top-heavy.

If the Raiders suffer injuries, their record could plummet quickly. The Raiders have the 4th toughest record in the NFL this year, they will desperately need to stay healthy. They will also need their stars to perform at a high level to negate the lack of depth on the team. 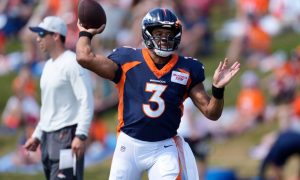 Someone has to come in last in the AFC West. Unfortunately for Denver, the rest of the division is absolutely stacked. 10 wins are nothing to be ashamed of.  Despite the team relying on Teddy Bridgewater and Drew Lock to lead the offense, they still managed to win seven games in 2021. It’s easy to see how they will improve with the blockbuster trade at quarterback.

The season begins and ends with the huge upgrade at quarterback with Russell Wilson. The Broncos are bringing over a player who has thrown for 37,059 yards and 292 touchdowns, with a career QBR of 101.8. The addition of Wilson will no doubt make Denver a better team. He should also have plenty of weapons with Courtland Sutton, Jerry Jeudy, K.J. Hamler and Tim Patrick. While it may not be as impressive as some of the surrounding AFC West weapons, it should be plenty to work with for Wilson.

Denver also returns the 3rd ranked defense in the NFL. Adding players like Randy Gregory and D.J. Jones to a defense that already features the likes of Bradley Chubb, Patrick Surtain II and Justin Simmons is sure to keep them among the best defenses in the league yet again.

Overall, the placement for Denver really comes down to your evaluation of the surrounding teams in the division. Most of the other teams have a track record in the West. However, Denver was only a seven-win team a year ago and still faces questions about how all of their pieces will fit together. While the offensive line is no doubt better than what Wilson was used to in Seattle, it is still far from perfect and about league average. This ranking simply comes from trusting the other organizations in the West more. Nothing would surprise me in this division, as evidenced by these teams all being separated by 1-3 wins.

In the next installment, we will cover the AFC South. Comment below what you think of the AFC South, as well as your predictions for the West.