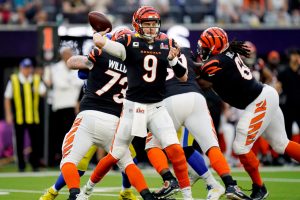 Kicking off the crowded AFC North are none other than last season’s AFC Champions. Though not for a lack of competition, the Bengals have retained a majority of the team that just reached the 2021-2022 Super Bowl. While history has not been kind to those who fail to win the Super Bowl, there appears to be too much on this roster to like. This season will be challenging, though, as they have the 3rd-hardest schedule in the NFL.

Previously in the 2021-22 season, Joe Burrow was sacked a troublesome 70 times. That would rank 3rd-most in NFL history. Despite that, Burrow put up fantastic numbers for a second year quarterback. Completing 70.4% of his passes, Burrow showed that the deadly accuracy that he displayed at LSU was no fluke. Burrow also posted an impressive 4,611 yards, 14 interceptions on a 108.3 QBR. The fact that Joe and Cincinnati were consistently great and managed to reach and nearly win the super bowl is nothing short of remarkable. When considering the offensive line that they were working with, it’s a wonder how their quarterback was still standing at the end of the season.

Following this, Cincinnati knew that there had to be an adjustment with the protection of their franchise quarterback. In the 2022 offseason, Cincinnati added La’El Collins, Alex Cappa and Ted Karras to the Offensive line in hopes to protect Burrow. A scary thought for the rest of the division and NFL. In 2021, Burrow recorded a 94.6 passer rating (best in the NFL) when passing in a clean pocket. Should the new additions keep the pocket clean more often, Joe should have no trouble repeating last year’s impressive numbers.

Of course, this task is made much easier with the help of his second-year wide receiver Ja’Marr Chase. Chase recorded one of the greatest rookie receiving seasons that we have ever seen. In 2021, the rookie standout had 81 receptions for 1,455 yards (2nd all-time among rookie wide receivers) and 13 touchdowns (2nd all-time for rookie wide receivers). After such a brilliant debut, it’s hard to imagine how the dynamic Burrow to Chase duo could improve much more.

Defensively, they remain largely the same, which isn’t bad news at all. The addition of Lou Anarumo helped transform the Bengal defense into a much more competent unit and became borderline elite by the end of the season. If they can repeat that performance, Cincinnati will be a handful for any team they match up against. 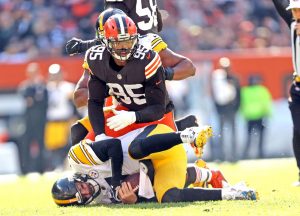 To start, this will most likely be the most divisive ranking on the list. At the time of writing, Deshaun Watson has been suspended six games and the record has been made in accordance with that decision. We await a decision from the NFL and NFL players association on a final determination for Watson. With so many variables, this record undoubtedly has the most room to shift.

Regardless of attitude toward Cleveland’s new quarterback, no one can argue that Watson is a massive improvement. This should be the case whether you get him for 17 games or 11 games. In Watson’s last season with Houston, he was spectacular. Posting 4,823 yards, 33 touchdowns against just seven interceptions while completing 70.2% on a stellar 112.4 QBR. Imagining Watson with one of the NFL’s most lethal rushing attacks to compliment his aerial assault should be quite the imposing threat.

The aforementioned threat is headlined by a fan-favorite Nick Chubb. Cleveland boasts great depth at running back, but Chubb headlines for a reason. In his four seasons, he has been one of the best backs in the league, tumbling for 4,816 yards and 36 touchdowns. Those rushing yards are only second to Derek Henry since 2018. Adding to the fact that Cleveland has arguably one of the NFL’s best offensive lines when healthy. It should be a great comfort for Cleveland fans, knowing they have such a reliable unit to lean on.

Defensively, Cleveland showed nice improvements to a unit that desperately needed it. Improving from 21st in 2020 to 14th in 2021 was a nice step in the right direction. They made significant improvements with the additions of CB Greg Newsome, LB Jeremiah Owusu-Koramoah, safety John Johnson, edge rusher Jadeveon Clowney and LB Anthony Walker. Cleveland will be hoping the group can take another step with an additional year of playing time together.

To conclude, predicting the 2022 season for Cleveland will prove to be difficult for even the greatest NFL minds. I argue that no matter the amount of time that Watson is suspended, Cleveland fans should be more confident than one might expect. In a recent article, I detail what Cleveland fans can expect with Jacoby Brissett and why he may be better than many are expecting. You can find this article by clicking HERE

While opinions will vary, I argue that the roster and depth that Cleveland has will allow them to compete with almost any team, regardless of the status of Watson. If Cleveland can get meaningful time with Watson on the field, they will be a threat to make a deep run in the playoffs.

EDIT: Updating after the 11 game suspension of Deshaun Watson. All of the previously made points stand. I remain confident in the surrounding roster and the ability of the players and coaching to make life easy of Brissett. With Deshaun missing more games than initially projected, I still expect the Browns to compete with just about any team they face off against. Cleveland may drop a couple more games against more high powered attacks such as the Chargers, Bills, Bucc’s and Bengals, but I argue that this team still wins 10-11 games this season. 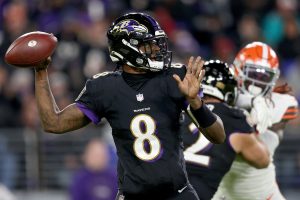 The 2021 season was exceedingly cruel to the Baltimore Ravens. All season long, starting in training camp, the Ravens were devastated by injuries. Even so, they remained incredibly competitive. It’s not hard to envision Baltimore returning to the NFL’s elite with a healthier roster.

The return of running back J.K. Dobbins should help tremendously. Dobbins was been viewed as an elite running threat, posting a stellar 5,104 yards and 43 touchdowns over the course of his three-year career at Ohio State. Though this is hardly a given, as there is no guarantee Dobbins returns to his previous form after recovering from an ACL injury in 2021.

The Ravens also lose WR Marquise Brown after trading him to Arizona. The Ravens will need to quickly discover if Rashod Bateman can become a number one option in the passing game. The good news is that Baltimore still has one of the NFL’s most reliable TE’s with Mark Andrews.

Baltimore also adds a potentially elite safety in rookie Kyle Hamilton. Sliding in the draft due to a slower than expected 40-yard dash. The Ravens made out with a steal, all for a stat that often shows to be less important than actual production. Baltimore also adds a stellar center in Tyler Linderbaum. Lindenbaum has been the highest graded FBS center in both 2020 and 2021, posting a 95.4 grade in 2021. Though a little undersized for your typical center, he possesses the grades and skills required to be an elite center in the near future.

In short, Baltimore has been one of the most consistent NFL franchises in recent memory. Their staff and roster construction have remained reliable and deep more often than not. Should they return with health for the majority of the 2022-23 season, Baltimore should more than easily contend for the AFC North Title. 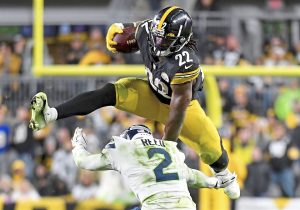 Lastly, the Pittsburgh Steelers suffer from a deep conference and a transitioning roster. While Pittsburgh has never had a losing season under Mike Tomlin’s tenure, it will be difficult to keep that streak in 2022.

Pittsburgh will be led by either rookie Kenny Pickett or journeyman Mitch Trubisky. Neither inspires confidence in 2022 when looking at the rest of the North’s quarterbacks. Even if Pickett is great in the long-term, it is usually unrealistic to expect rookie quarterbacks to dramatically improve a team. No matter the quarterback, they will have much to overcome. Last season, the Steelers’ 32nd-ranked offensive line allowed its running backs to be contacted at or behind the line of scrimmage on 42% of their carries. That would be the second-worst rate in the league. They have made some improvements, but not enough to expect a dramatic turnaround.

The weapons are plentiful for the Steelers, with Najee Harris, Diontae Johnson, Chase Claypool, George Pickens and Calvin Austin. It’s hard not to be excited with Harris, considering the line that he had to work with, posting 1,667 total yards and 10 touchdowns as a rookie. With improvements on the line, there is hope that he can break out even further.

Meanwhile, the Steeler defense seems to be thriving more on reputation than actual production. Not without a lack of tremendous players as the reigning defensive player of the year, T.J. Watt and superstar Minkah Fitzpatrick reside on the roster. But last season Pittsburgh ranked just 20th in the league. In a division that hosts the likes of Joe Burrow, Lamar Jackson and Deshaun Watson, this appears to be bad news. Without any apparently meaningful additions through free agency or the draft, it is difficult to see a path to improvement this year.

Long term, the Steelers organization will be just fine. They have remained one of the league’s most well-run organizations over the course of the NFL’s history. But with a transitioning roster and the league’s 12th-toughest schedule, 2022 does not appear to be their year. Talent sprinkled over the roster and tremendous coaching will make them difficult to handle. Even so, it is fair to expect a step back this year.

In the next installment, we will cover the NFC East. Comment below what you think of the AFC North, as well as your predictions for the NFC- East.