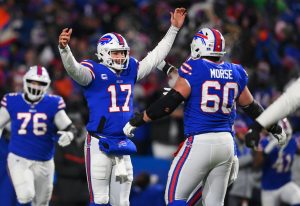 To put it simply, Buffalo has one of the best rosters in the NFL. While the AFC East teams such as the Jets and Dolphins seem likely to be improving, they are not far enough along to challenge Buffalo this season. They do have to replace OC Brian Daboll, but a roster this fleshed out should ease that transition.

Led by quarterback  Josh Allen, Buffalo has no shortage of weapons on offense. Already holding one of the league’s best receivers in Stephon Diggs, the Bills have also acquired receivers Jamison Crowder, rookie Khalil Shakir, tight end O.J. Howard and running back James Cook. Health providing, the Bills should not have an issue moving the ball.

Should they need time to get a rhythm started with their new OC, Buffalo should be easily able to rely on their defense. The Bills added edge rusher Von Miller and first-round pick Kaiir Elam at cornerback to last season’s top-rated defense. This alone provides the Bills with a very solid foundation for their team to rely upon.

With the 12th hardest schedule in the NFL, it isn’t without its challenges. Expect Buffalo to dominate the East with the exception of possibly dropping one of the two games against Miami. The Bills roster is so talented that the floor is just too high with this team. 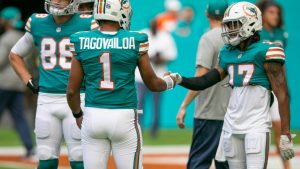 Miami is in a much better scenario now than they were at this time a year ago. It is clear to see that their roster has made massive strides. While it hasn’t been without distraction, ( Pick sanctions for tampering and the firing of head coach Brian Flores ) fans in Miami have plenty to be excited about.

On offense, Miami returns a fantastic weapon in Jaylen Waddle who posted 104 receptions for 1,015 yards and six touchdowns. Those are great numbers for a rookie. Additionally, they add one of the league’s most lethal weapons in Tyreke Hill. All of this while adding protection for the often injured Tua with left tackle Terron Armstead and retaining tight end Mike Gisicki under the franchise tag. Head coach Mike McDaniel should have plenty to work with at running back with Chase Edmonds and Rasheem Mostert. If Tua can make the leap that many are predicting, Miami could be quite the dangerous team.

It isn’t hard to see improvement for his team, but they do have concerns on the offensive line still. With an injury history like the one that Tua has had in his short time in the league, it is easy to see why there might be a buyer beware label for this team. A plus for this team is the return of most of their defense which raked 16th in the NFL a year ago.

It shouldn’t be too much of a debate that the Dolphins have improved, but with multiple games against Buffalo, an improving Jets team and the Belichick-led Patriots team, it will not be a walk in the park for the organization. 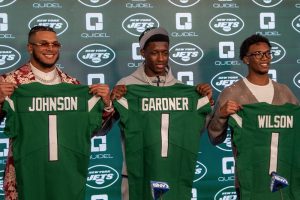 After winning just four games in 2021, a two-game improvement may not seem massive, but considering the competition in the ACF East, it is a nice step in the right direction.

The NFL 2022 NFL draft may have very well been won by the Jets. While they will be inexperienced, rookies Garrett Wilson and Breece Hall. Garrett Wilson may be the draft’s top receiver; a polished route runner who ran an explosive 4.38 40-yard dash at the combine. In three years at Ohio State, Wilson accumulated 2,213 yards and 23 touchdowns, all while sharing receptions with Chris Olave ( 11th pick of the draft ) and Jaxon Smith-Njigba ( expected top 10 pick in the 2023 NFL draft ). Breece Hall ran for 3,941 yards and 50 touchdowns in three years at Iowa State, while adding 734 yards and six touchdowns through the air, adding to the versatility of the rookie running back. In free agency, they also added C.J. Uzomah ( tight end for Cincinnati during their Super Bowl run ) and Pro Bowl guard Laken Tomlinson.

On defense, they made two great acquisitions in the draft in cornerback Ahmad Gardner. In his collegiate career, Gardner has never allowed a single touchdown to be scored against him. While that streak will almost certainly be broken in the NFL, the defensive potential is through the roof. They also added Florida State edge rusher Jermaine Johnson, who recorded 11.5 sacks in his final year with the program.

Youth will hold back the Jets in 2022, but they have made significant long-term improvements that should set them up better for years down the road. If the Jets hope to make significant strides, they will need more from second-year quarterback Zach Wilson. In 2021 Wilson through for just nine touchdowns, 11 interceptions on a 55.6% completion percentage. If he can show improvement with a new host of weapons, the Jets may be able to make splashes this season. 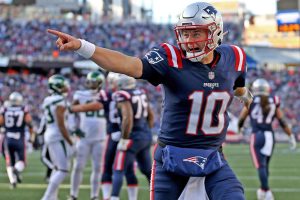 Betting against Bill Belichick and the Patriots rarely ages well. But it is too difficult to envision the path to success when it comes to the roster construction and the rising teams in the AFC East.

On offense, they do return many of the same players, most notably, second-year QB Mac Jones. The weapons at Mac’s disposal do not exactly invoke confidence. They are without a lead receiver, with DaVante Parker being the seemingly best current option. With a questionable receiving core or a featured running back, it’s fair to wonder where the production will come from. The lack of weapons feels alarming in comparison to the Bills, Dolphins and Jets, in light of the acquisitions New York made this off-season. The Patriots will also need to rely on a new play caller after OC Josh McDaniels left to coach the Raiders.

On defense, they lost their star corner, J.C. Jackson, leaving a question mark for the future of that position. At the moment, it does not appear that any of the off-season moves made by New England will improve the defense. The good news is that New England’s defense ranked number two in the NFL a year ago. The loss of Jackson hurts, but they have enough on defense to still remain challenging.

While I am admirably lower than most on the Patriots, they will no doubt be challenging to most teams that meet them on the field. No win comes easy against Belichick and this will almost certainly still be the case despite all of their looming questions.

In the next installment, we will cover the AFC West. Comment below what you think of the AFC West, as well as your predictions for the East.