The MLB Trade Deadline is Tuesday 8/2 at 6 pm. That means teams will no longer be able to make any trades to bolster their rosters after the deadline. For teams like the Guardians, it could be a good time to try and level up the team. Cleveland could look to go from a surprising team to a playoff contender. There are three current Guardians players who may be traded by the deadline. 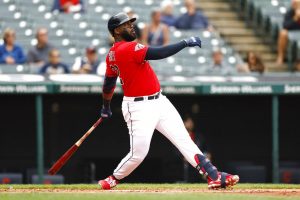 Franmil Reyes was acquired from the San Diego Padres just before the MLB Trade Deadline three years ago in 2019. Reyes was acquired in a trade package that sent Trevor Bauer to the Cincinnati Reds. He was slotted in as the Guardians (then Indians) designated hitter role from the jump. He has tried his hand at playing some outfield here in Cleveland but ultimately found the most success at DH.

Franmil had a solid 2020 campaign in the shortened season and he had a very good year last year in the final year as the Indians. In 2021, he batted .254 with 30 home runs and 85 RBIs. He was able to accomplish those stats in 115 games. This season, however, Franmil has struggled at the plate. Position Players can afford to struggle a little in the batter’s box. But a primary DH really has to be on his A-Game when he is at the plate. He has batted .220 with nine home runs and only 28 RBIs. He has missed some time due to injury this season, but he has not swung well when healthy.

The Guardians could look to move Franmil or others for either prospects, cash, or win-now help. The Guards are in an interesting situation this season where they are a very young team but could be just a piece or two away from playoff contention. 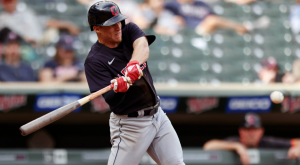 Myles Straw came over to the Guardians (then Indians) at the trade deadline in 2021 from the Houston Astros. Straw came in exchange for Phil Maton and Yainer Diaz. Myles Straw has been the starting Center Fielder ever since. He finished 2021 batting .285 with 14 RBIs for the Indians in the 60 games he played. Straw also stole 13 bases last season in Cleveland.

This year, however, Straw’s numbers have dropped. In 94 games with the Guardians, he is batting .219 with zero home runs and 17 RBIs. He has also stolen 13 bases this season. He has been elite defensively in center field this season, but the Guardians have a lot of young outfielders who will start warranting steady playing time. Steven Kwan, Nolan Jones, Richie Palacios (a natural infielder) and Oscar Gonzalez all have played really well for the Guardians this season. George Valera and Will Benson are also natural outfielders in the Guardians minor league system that should be coming up to the big leagues soon.

Cleveland could look to move Straw while he has some value, even though he just signed a five-year extension with the Guardians. This means he has some club control which could make him a valuable trade asset for a team seeking win-now outfield help. 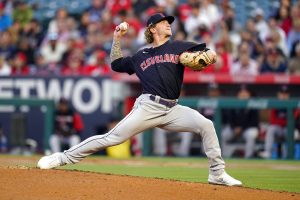 The third of the three current Guardians players who may be traded by the deadline is somewhat of a surprise. Zach Plesac was drafted in the 12th round by the Cleveland Indians in the 2016 MLB Draft. Zach has had a great career with the Indians/Guardians. Plesac made his way through Cleveland’s minor league system and made his MLB debut in 2019. Zach started 21 games with a 3.81 ERA. He averaged 6.85 strikeouts per nine innings.

The past two years Plesac has had ERA’s of 4.67 and 4.09 respectively. He is a very quality starting pitcher that should warrant a high trade value. Why would Cleveland trade Plesac? Well, the Guards have very good starting pitching with Bieber, Plesac, Civale, McKenzie and Quantrill. Cleveland also has great pitching rising up in the farm systems. Daniel Espino and Xzavion Curry are good young prospects who could shortly be making their way up to the Guardians. This could make some of the current starters expendable soon. If a good package comes along, Cleveland may look to move one of its starters before the deadline on Tuesday. Let’s just hope it’s not Shane Bieber.

Any of these three players could go, or a number of others. As I mentioned, the Guardians are sort of in an unknown spot. Cleveland was not expected to start the season so well. This has left us curious how Cleveland will attack the upcoming deadline. Let’s all just remember some of the past deals and how well they ended up for Cleveland. Remember how mad we were when we didn’t spend all our future money on Fransisco Lindor? Well, current All-Star second baseman Andrés Giménez may have some things to say about that.

Thank you for reading this article on the three current Guardians players who may be traded and be sure to stay up to date on clesportstalk.com so you can see all the latest news and stories on Cleveland Sports.