Putting the Cleveland Cavaliers on a West Coast trip that overlaps Valentine’s Day with a game tonight in Los Angeles against the Clippers. It starts at 10 p.m. Cleveland time.

In previous years, I had the excuse of just watching the Cavs game as a reason why I wasn’t making the effort of trying to go out with a date on this special day. The fact that it’s such a late game takes that away from my excuses. Frankly, I could go out with a girl for a nice dinner, even some social-distanced dancing and be back in time to watch the Cavs.

A lot of you are probably thinking, “Wow, this Zach dude would put the Cavs over going out with his special girl?”

No, no. If I was in an actual relationship that was serious, I would go out with my girlfriend over the game. Sure, I would sneak a few looks at the phone to see the score and whatnot “use” “the” “restroom”, but I’d be a nice boyfriend!

I’m talking about the single life. Guys, we know the struggle.

One can only watch ROCKY Youtube videos so many times in one night. Without the Cavs, there is nothing until the late-night tipoff at 10. Just wiping away the tears of my own misery.

This year’s team is not exciting at all, especially as of late on this six-game losing streak. There is absolutely no chance of title contention and it’s not like LeBron James and Kyrie Irving are dazzling the screen anymore. Thus, even if the game was at seven, it’s unfortunately “miss-able” this year.

Well, if there are any girls reading this in the Cleveland area that are completely lonely and sad on this Valentine’s Day, I don’t have a Cavs game to watch and use as an excuse for my lack of dating. You know what to do… 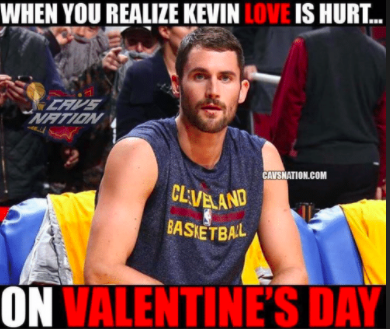 While this article is mostly a joke, I seriously do want to wish everyone a Happy Valentine’s Day. I hope you enjoy your time with that special someone. Just be home by 10 – HAHA!