On this day, 45 years ago, the Indians actually set a very positive milestone in the MLB that should garner positive attention.

The first African-American manager in MLB history, Frank Robinson, debuted on this day back in 1975. His Indians defeated the New York Yankees by a margin of 5-3 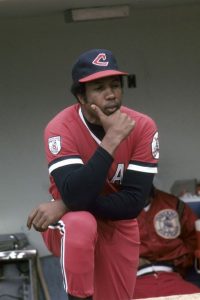 Of course, Robinson wasn’t just hired for his skin color. He had a brilliant 20 year career as a player beginning in 1955, beginning with the Cincinnati Reds for a nine year stretch, going to the Baltimore Orioles for five years, then coming to Cleveland after a couple of very brief stints with the Dodgers and the then-California Angels.

He is the only player to ever win MVP honors in both the AL and NL. For the former, he did so after capturing the Triple Crown with the Orioles. He achieved the latter in the midst of an NL pennant-winning campaign for the Reds.

Robinson was a 14-time All Star. He finished his career with solid numbers, including a lifetime .294 batting average, a swell 586 home runs, and while he didn’t quite crack .500 as a manager, he did win more than 1,000 games as a skipper, so he was definitely experiencing some good results in that capacity.

His time with the Indians as the team’s manager was a brief two and a half year stint. His first season saw the team go 79-80, with the next being a modest improvement to 81-78. He was unfortunately fired after beginning his third season with a 26-31 record.

Still, Robinson’s overall career was nothing short of prolific. He was inducted into the Hall of Fame as a member of the Orioles in 1982. He would also ultimately be entered into both the Orioles and Reds Hall of Fame, both occurring in 1978. The Reds would be the first team to erect a statue in his honor, constructing a bronze one at their home stadium of Great American Ballpark. A little less than a decade later, the Orioles would follow suit in 2012. Finally, for those who have attended a home Indians game at any point since 2017, the opportunity to see a bronze statue of Robinson would present itself then.

While Robinson’s career as a manager on the field was auspicious, his impact in the role off the field was huge from a cultural perspective. He was also an absolutely amazing player who has gone down as one of the all-time greats. The fact that the Indians were a huge part of his history deserves plenty of recognition.