Amidst the ongoing pandemic, taking a trip to the past to appreciate memorable moments in Cleveland sports history has served as a placeholder for what would otherwise be even duller, more listless, sport-less days.

Today, there is quite a lot to discuss.

Going in order from most distant to most recent:

The Tribe were a part of a fairly ugly, albeit ultimately minor, portion of history in 1993. In front of a massive, packed crowd of just over 73,000 fans, the team was subject to a rough beatdown at the hands of the New York Yankees by a score of 9-1

The Indians had gotten off to a swell 4-0 start heading in to their home opener, which did not go very well.

Flashing forward to 2003, and the Indians were once again on the wrong side of a fairly minor piece of history. The hated Kansas City Royals, fresh off a terrible 100 loss season, became the first team ever to start off the next season on the right foot, specifically with a 5-0 record. Their fifth victim, of course, would be the Tribe on this day 17 years ago. 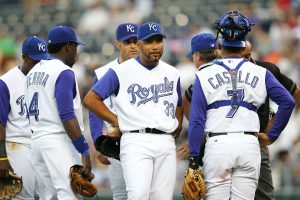 CST’s viewership may have a more vivid recollection of this next one, as it is actually somewhat recent. Unfortunately, this one is also rather murky to look back on.

Back in 2012, the Indians hosted the Toronto Blue Jays for their season opener. The game went 16 innings, an MLB record for a season opener, but the Tribe were ultimately outlasted 7-4 in a game that lasted just a bit longer than five hours.

And, finally, yet another iffy piece of history, another one made fairly recently. In 2014, then-Minnesota Twins manager Ron Gardenhire, a likely candidate for the Hall of Fame, won his ceremonious 1,000th game as a major league skipper. It should be fairly obvious where this is going- it was against the Indians, by a 7-3 tally.

Needless to say, April 5th is a date that Indians fans can kinda just go ahead and forget about.