DE Myles Garrett comes in at 6’4 and 272 pounds of a complete freight train for the Browns. The young man out of Texas A&M was drafted by the Browns five years ago today #1 overall.

Garrett sacked Josh McCown on his first NFL snap and hasn’t stopped since. With just 4 more sacks, he’ll be the Cleveland’s all time leader.

Myles Garrett is a shining example of getting it right. pic.twitter.com/kRV18J9Rp1

The man still in front of him on said sack list? The legendary Clay Matthews. The difference is Matthews played in 164 more games than Garrett has. It just goes to show just how great a selection this was by the Browns. 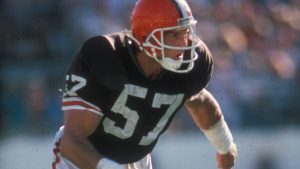 Now, Garrett made 16 sacks in 2021 and will look to make his presence known even more in the 2022 season upcoming this fall. Certainly, the Browns have had a lot of turmoil this offseason but one solid has been Myles Garrett and knowing he’ll be there for this team moving forward.

After all, Garrett is signed with the Browns through the 2026 season and becomes an unrestricted free agent in 2027 at the age of 32. Let’s worry about that when we reach that time…

The other great part of having Myles Garrett on the team is his amazing personality. He’s simply just a great guy and never causes any drama, unlike a certain someone whose name starts with a B…

Defenses fear Garrett and have to put a double team on him to protect their quarterback. This allows other defensive linemen on the Browns to have more room to attack the quarterback. It all helps the Browns defense from top to bottom.

Five years ago, the Browns took DE Myles Garrett and ever since then it has completely helped the team in so many beneficial ways. While the Browns do not (currently) have a first-round pick, let’s see if this team is able to pick another player that can make an impact with one of the selections the team does have. It is crucial even with a first-round pick traded away for QB DeShaun Watson….

We have a couple more months until the football season begins. However, the draft gives us something to get excited about here in April! Let’s make the most of it and hope our Browns get some great players moving forward. Maybe even another player that’s a Myles-Garrett-type of a star!

Enjoy the draft. Also, be happy the team doesn’t have to take a quarterback!