Three words: Odell Beckham Jr.! The Cleveland Browns rolled over the New York Jets this week for their first win of the season improving to 1-1 on the year with a convincing 23-3 victory. To be fair, the Jets never really had much of a chance in this one with QB Sam Darnold out with Mono and WR Quincy Enunwa, DL Quinnen Williams and LB CJ Mosley out due to injury.

However, the Browns capitalized on that as they led the entire game and even though the win wasn’t as glamorous as some hoped, it was still a 20-point win, nonetheless. This was only accomplished by two other teams this week. Cleveland was much-improved from Week 1 and there were definitely a lot more bright spots, but they still have a lot to work on against the defending NFC Champions, the Los Angeles Rams on Sunday Night Football.

To start off the game, the Browns had a really nice drive going that started out with a couple good runs from Nick Chubb. Then Baker took over completing three of his first four passes highlighted by a 27-yard strike to D’Ernest Johnson and a phenomenal one-handed highlight-reel 33-yard catch on the right sideline to bring Cleveland to the four yard line. After OBJ’s huge play, the refs forced him to go off the field because his visor apparently had too much tint, which seems quite ridiculous. Without him, the drive stalled and ended with a chip-shot field goal from rookie Austin Seibert. After that, it was time for the defense to start showing off against the Jets as Myles Garrett had a sack for a 13-yard loss on second down to completely halt their first drive and force a three-and-out.

Starting with great field position after a nice return by Jarvis Landry, the Browns didn’t do much on the drive. They did still score, though, because all they needed was a late hit by Jamal Adams to set up a 48-yard field goal from Austin Seibert. The Browns defense went on to force yet another three -and-out, which became a common occurrence in the game. Jarvis Landry then had another nice return, this one wiped out by a penalty. Nick Chubb had a couple more nice runs and a nice pickup in the passing game as well, but there wasn’t much else to note. Jamie Gillan started off his incredible day with his first punt inside the 20 landing at the 17 but a holding penalty caused the Jets to start at their own nine. 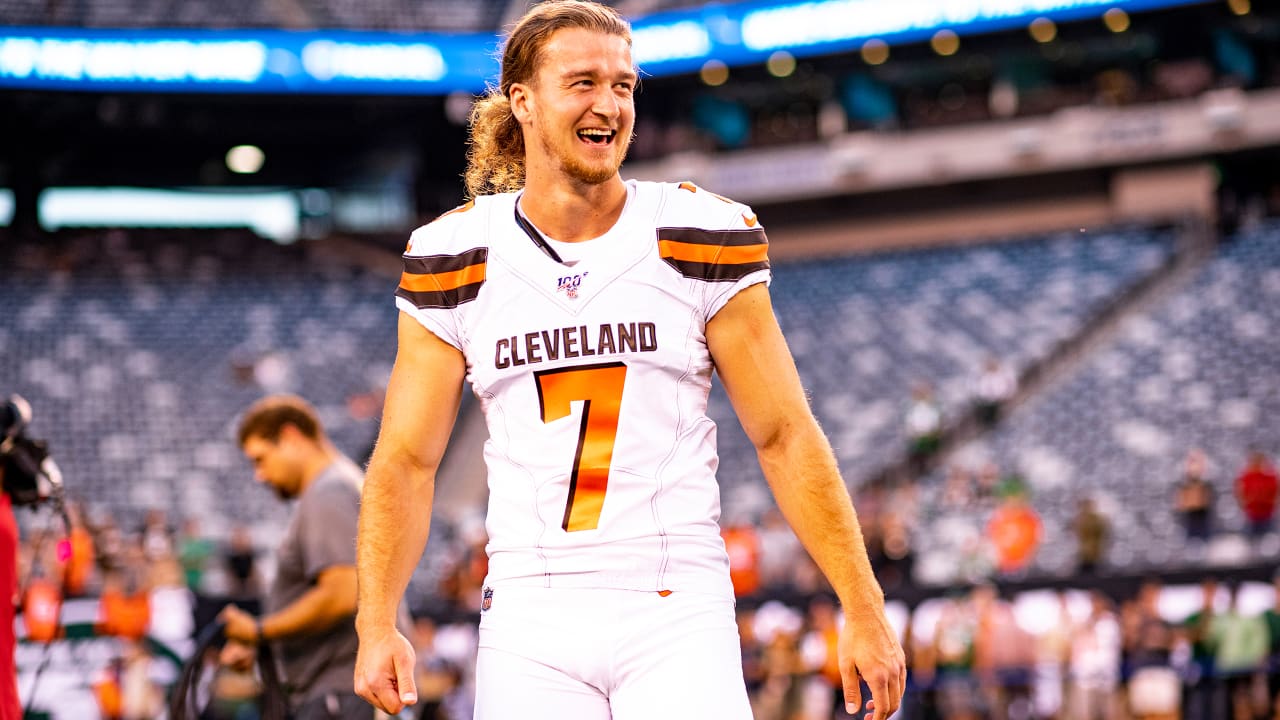 The last drive of the quarter did not go well for the Jets as it was plagued by penalties. Then again, it wasn’t a three-and-out either, so it was sort of progress. The Browns looked like they had another quick stop until Myles Garrett had a double penalty in the form of both offsides and roughing the passer to give the Jets their first first down of the game. The rest didn’t go too well though as they were flagged for a holding penalty and then Morgan Burnett had his second sack of the season on a beautiful zero blitz call by Steve Wilkes that forced the Jets to eventually punt facing a 4th & 29.

On the Browns first drive of the second quarter, they finally hit pay dirt with a 19-yard touchdown rush from Nick Chubb. The Browns did nothing but pass the ball prior to the long run, which is probably not the best strategy for success, but it worked out this time. A holding call on the Jets defense on 4th & 2 gave Chubb the opportunity to scamper into the end zone on the fresh set of downs. While they might have ended up scoring here, one can’t help but wonder why Chubb only got one carry in the first place. The Browns have to be more balanced with the run and the pass, which will open up the field much more for Baker and it will result in drives ending similarly to this.

For a while, there was seemingly only one way that the Jets could get a first down, a Myles Garrett roughing the passer. The Jets would’ve had another three-and-out of it wasn’t for Myles Garrett committing another crucial penalty. This was far earlier of a hit than the last penalty, but the play resulted in a pretty severe injury to QB Trevor Siemian, so the call will likely be made every time. After that, Le’Veon Bell was able to run the ball far enough down the field to set up the Jets for a field goal to avoid s potential shutout. The Browns defense did a really nice job displaying the bend but don’t break mentality, but they still have to clean up the sloppy penalties that will extend drives no matter how difficult that might be at times.

For the rest of the half, the Browns resorted to being way too pass happy, which only lead to two completions in eight attempts and three points solely because they were dominating in terms of field position in part to stud rookie punter Jamie Gillan pinning the Jets inside the 20 three times in the first half alone. Baker was admittedly off, but the copious amounts of vertical routes weren’t doing him any favors either. The Browns have to scheme around the team’s strengths and try to get the ball out of Baker’s hands much quicker. As for the Jets, their last drive ended with yet another three-and-out being lead by third string QB, Luke Falk. After Seibert’s third field goal, the Browns went into halftime with a 16-3 lead.

The second half started similarly to the first half for the defense. On the first play, Myles Garrett had his second sack of the day forcing a quick three-and-out. Unfortunately, it was more of the same for the Browns offense as well; too much passing and Nick Chubb looking good on his lone touch of the drive as the Jets forced a three-and-out of their own by sacking Baker on 3rd & 2. Rinse wash repeat for the Jets once again as Jamie Gillan had his fourth punt inside the 20 and the first play resulted in Myles Garrett’s third sack of the game and fifth on the season, which helped foster yet another three-and-out with the help of a false start penalty. However, the Browns still couldn’t capitalize with the drive ending in a fourth-straight three-and-out to open the half.

Something finally happened on the next drive though as Luke Falk started to build some chemistry with Robby Anderson who started to create some easy separation from Denzel Ward (who has been disappointing for the Browns do far this year). However, once again, the Browns bent, but they didn’t break as they seemed to stop the Jets in the red zone at the 12 forcing 4 & 2. The Jets decided to get a little greedy, though, and they went for it rather than take the points despite it being still relatively early in the game. That decision proved costly as Le’Veon Bell was tackled a yard short by the outstanding rookie CB Greedy Williams along with LB Joe Schobert.

After that huge stop is when it finally happened. On the first play, Baker hit Odell over the middle of the field on a slant and OBJ took it straight to the house for the longest touchdown of his career. The 89-yard catch and run was a fantastic sign and Browns fans everywhere were definitely elated to see the breathtaking ability that Odell flashed on the play. After the extra point, the game was essentially over with the Browns being firmly in control with a 23-3 lead.

On the next two drives, the teams reverted to their offensive woes with a three-and-out for each team. After the Browns drive, Jamie Gillan continued his masterful night with his fifth punt inside the 20 pinning the Jets at the 12 once again. From there, the Jets converted two first downs on a couple chunk plays, but then the drive ended with their second turnover on downs of the game at the Cleveland 43 yard line. Nick Chubb started off Cleveland’s first fourth-quarter drive with a 15-yard run that nearly broke for a lot more if he wasn’t slowed down around the line of scrimmage. Odell had another first down reception for 12 yards, but the drive didn’t end too long after that. Two plays later Baker threw his fourth interception of the season on a tipped pass. To be honest, there’s really no reason to be throwing late in the game up 20, so I’m going to put that one on the coaching staff. The coaches are just asking for the Jets defense to make a big play to let them get back into the game a little bit, so it’s probably best to just let Chubb go to work.

The Browns really gave a ton of momentum to the Jets with the turnover, and they were putting together a really nice drive where QB Luke Falk showed some ability. Luckily, one of the Browns best playmakers, LB Joe Schobert, made a huge play by forcing a fumble at the seven recovered by CB TJ Carrie to keep the 23-3 lead. All anyone should care about during Cleveland’s next offensive possession is that they threw the ball more than they ran it despite having the game in hand. The drive ended with Baker being sacked and there is absolutely no reason whatsoever to put your franchise quarterback in that situation. The coaching staff did a much better job than in Week 1, but the way they managed the team late in the game with the big lead was downright unacceptable. This issue needs to be addressed immediately before disaster strikes; there’s no point in doing anything else other than just running the ball to drain the clock. The only good takeaway from that final drive was a sixth punt inside the 20 for Jamie Gillan, which lead to him receiving a well-deserved AFC Special Teams Player of the Week. The final drive of the game was a confidence booster for the young QB and the depleted Jets roster more than anything as they made some nice plays, but the time ran out before they could even score.

All in all, the Browns didn’t play exactly how everyone expected, but they got the job done. No matter who a team is playing, it’s difficult to win by 20 points. The coaching staff still has a lot to clean up and the players have to make another positive stride in terms of discipline. This can be a very dangerous football team. Both LBs were all over the field for the Browns, the rookie specialists were outstanding, Greedy Williams continued to look phenomenal and Myles Garrett looked unstoppable. With that being said, there’s a lot to be excited about for Sunday Night Football in Cleveland against the LA Rams.