I’ll be boycotting watching Monday Night Football tonight, a game between the Los Angeles Rams and San Francisco 49ers because I have no respect for a diva NFL player named Odell Beckham Jr. who happened to, once upon a time play for the Cleveland Browns for two-plus seasons, but now plays for the Rams. Why might you ask? Well, he quit on the Browns two weeks ago. It’s the biggest accomplishment of Beckham Jr.’s career in quitting on things. It’s likely an art he picked up from his enabler dad who helped get his son out from playing with the Browns because the quarterback wasn’t throwing the ball to his son enough.

Beckham Jr.’s dad started posting to free his son from the Browns two weeks ago and the Browns front office succumb to the public pressure to release him. Other high-profile athletes, like LeBron James, also got into the mix demanding that OBJ be released. By the way, I’ve lost, what little respect I had for King James with that nice little cameo.

So back to OBJ. We didn’t hear from him in any of this time, likely due to the fact that the 29-year-old, yes, let me repeat that, the 29-year-old was letting his daddy do his dirty work.

Beckham Jr. then was granted his release over a week ago from the Browns. Since then he signed to play with the Rams, who are ignoring the playbook in finding character guys to play on their team and going to the “who cares” card because honesty and respect for the game have gone out the window in place of money and winning. So I will not partake in watching a stupid spectacle tonight as Beckham Jr. gets his love from media outlets like ESPN who are just about money.

Beckham Jr. tried to sugarcoat his days in Cleveland with a nauseating letter, where he supposedly tried thanking everyone under the sun, including trying to tell the Dawg Pound fans thank you. 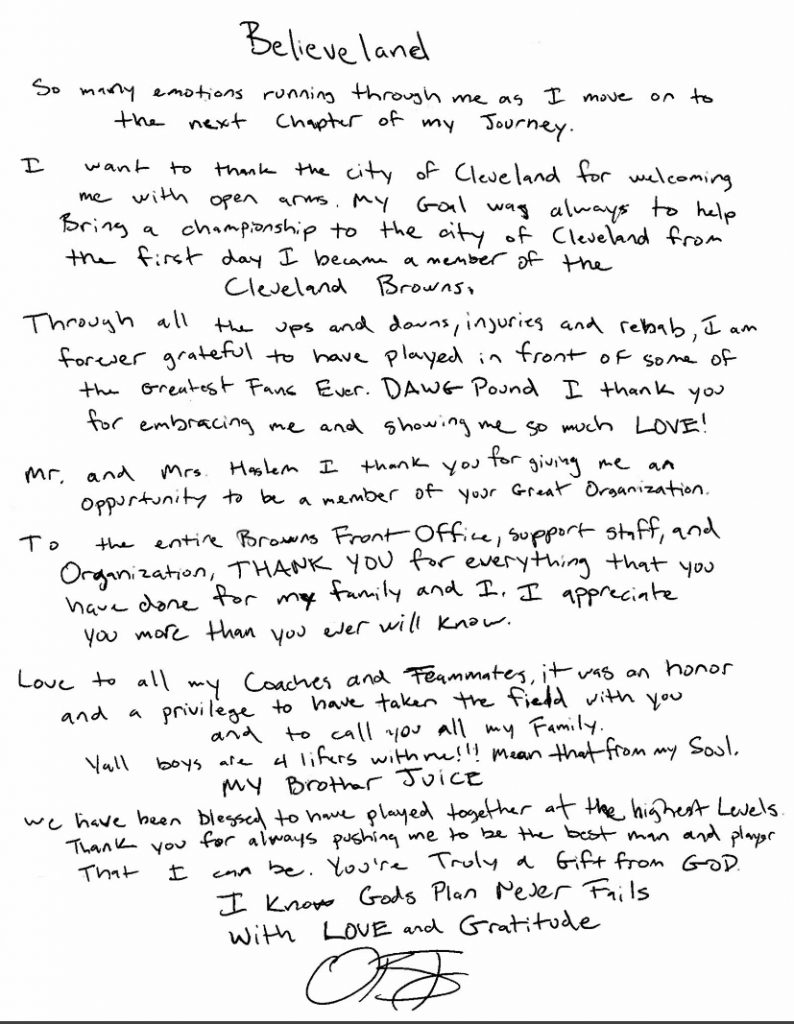 That letter doesn’t cut it, buddy.

You quit on your team, your teammates and the community that supported you. You were sent away from New York and the Giants a few years back because your self-centered approach to life and football wasn’t exactly a big hit in New York. Why the Browns brought you here is up for debate, but you are a name and not much else. The teams that you’ve been on haven’t been good and you are part of the reason for those failures.

Your attempt at trying to say thank you to Cleveland falls on deaf ears around here.

My wish for you is that you actually listen to those that try and support you because you aren’t hearing them now and trying to understand. I can blame your dad for that maybe or maybe I should just blame you? You are 29 years old and it might be time for you sir, to take accountability for your actions.