The best professional players are those that have extreme talent yet garner limited distractions. That, obviously, is not Odell Beckham Jr. I was just as excited as every other Browns fan when the trade was made for the former Giants star. Thus, don’t think of me as this pessimistic buzz-kill. I think back to players like Marvin Harrison of the Colts and Larry Fitzgerald with the Cardinals. Those wideouts were amazing and simply did their job.

However, I’m starting to understand how my brother feels when we’re both around the house and he has to deal with me. Beckham Jr. causes a lot of commotion, demands a lot of attention and honestly, do the stats this year reflect that type of attitude?

In 13 games, OBJ has 58 catches, 844 yards and two touchdowns. Obviously, the former Giant has underperformed this year, especially in the touchdown department. Some will blame quarterback Baker Mayfield, some will blame the hernia injury that wasn’t addressed properly.

Take away 2017 (injury) and OBJ’s season stats with the Giants each year are much better.

OBJ has four more complete seasons under contract (after this one). Yet, the rumors are already spreading like wildfire. “Odell reportedly told opposing players to ‘come get me’ during at least one game in October.” People are saying he’s unhappy in Cleveland amongst other things. 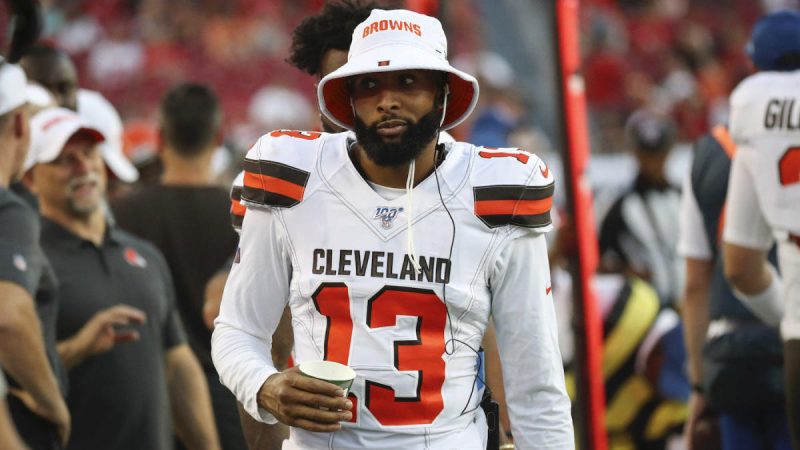 It’s obvious the production hasn’t been mind-blowing so far wearing the orange and brown. Sure, one day I may say, “I can’t believe my stupid-self actually suggested getting rid of OBJ.” *As he holds up the Vince Lombardi trophy with Baker Mayfield.*

If things don’t change, these next four seasons are going to be filled with a million distractions from a team that already has a quarterback that draws so much attention. My feeling is that Baker clicks better with WR Jarvis Landry and that guys like WR Rashard Higgins aren’t given any type of chance to perform.

Would trading Odell Beckham Jr. be the worst thing in the world, if for the right value in return? It’s not healthy for this organization to have constant attention on OBJ. Above all, if he truly is not happy in Cleveland, then it’s time to start looking for a trading partner this offseason (this year’s trade deadline was Oct. 29). The Browns simply cannot have players on the team that do not want to be here and even more so draw that much attention and want out.

As I already said, things may change. The Browns may find a way to make the playoffs (by some miracle) as OBJ shines to get there. Next year, in the coming years, OBJ may find himself in Cleveland and help the team win. At that point, I will gladly eat my words.

From Villain to Hero – Rest in Peace to a Legend

Interviewing Browns Ahead of 2020 Pro Bowl!