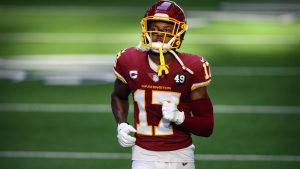 Terry McLaurin did not put up WR1 type numbers, but his time will come. Many fantasy managers are panicking to get rid of McLaurin after Ryan Fitzpatrick’s hip injury Sunday. McLaurin has been a viable fantasy wideout no matter who is throwing him the ball, and now he has more targets in Curtis Samuel and Logan Thomas that can take the attention off him. Expect McLaurin to bounce back and take a chance if you have someone that is dangling McLaurin this early.