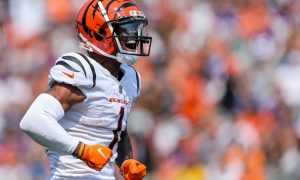 What a day for the young bucks. Jamar Chase goes for over 100 yards and a score, Devonta Smith catches his first NFL TD in the same spot he caught his National Championship game-clinching TD pass, and Jaylen Waddle caught his first TD as well. That his just absurd and shows just how valuable these guys can be to your fantasy teams. We have heard about the college connections each of these receivers has with their quarterbacks numerous times, but I think week one proved there is some legitimacy that the chemistry could be dangerous. Both Smith and Chase were the number one targeted receivers in their offenses, while Waddle was one target behind long-time veteran Devante Parker. Considering this is their first time going against professional talent, that is extremely impressive. The most impressive was Jamar Chase, who not only went over 100 yards but did it an offense with two very good wideouts in Tee Higgins and Tyler Boyd, who were already building off of their relationship with Joe Burrow from the year before.