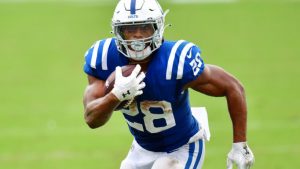 Hear me out on this one, and remember this is the encouragement section. Taylor came into the fantasy year as a guy managers were forced to reach on in that 9-15 pick range, which makes it crucial that he doesn’t bust. Overall, Taylor did not have an eye-popping day on his fantasy line but looking a bit deeper, there were some nuances in the run and pass game where Taylor was able to contribute. Taylor touched the ball 23 times in a game vs Seattle where they were playing from behind. With Marlon Mack and Nyheim Hines in the backfield, it was unclear how many touches Taylor was going to get this season. If this game was any indication of how the season will go, fantasy managers will be just fine. Mack did not make an appearance in the game despite being active, and Hines was out-snapped and nearly out-targeted by Taylor. The assumption going into this year was that Hines would be in on primarily passing downs and that he would have a critical role in the Colts offense. While the Colts are still committed to that philosophy, it seems as if they are also using Taylor in passing downs to keeps defenses on their toes. Taylor caught six of his seven targets for 60 yards (led all Colts receivers) and rushed 17 times for 56 yards. He was just one target shy of Hines, but they did have the same number of receptions at six. An encouraging sign for managers moving forward.