There were a number of players that balled out for fantasy managers. Some performances were expected, some unexpected, but none the less it was an exciting start to the football season. With that, I wanted to roll out my first of many 9 & 9 articles. This is an article that I would like to update weekly with new topics every week analyzing 9 players’ fantasy performances and what you as an owner can do to expand on those performances. The other 9 will be a prediction of the perfect traditional fantasy lineup going into the next week. Ready? Here we go!

Performances I was encouraged by: 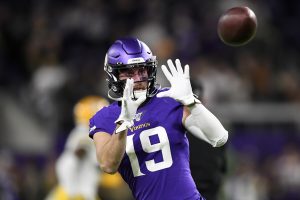 Thielen was one of the most scrutinized wideouts coming into fantasy this year, even being among the top 10 in terms of fantasy totals last year. However, with the emergence of Justin Jefferson late last year, Thielen became very boom or bust. Thielen’s week one was very encouraging for fantasy owners as he led all Vikings’ receivers in targets, receptions, and yardage. Not only that, but Thielen also hauled in two touchdowns. The volume for Thielen was the concern going into this year, but if he can keep his target share consistent, Thielen could be a WR1. If you got him late in your draft, you should be sitting pretty.