I’ll never forget that run of 92 yards to the house for Chubb against the Atlanta Falcons in that 2018 rookie season. I was sitting up in section 537 and when the offensive line blasted open the huge gap in the Falcons’ defense and allowed Chubb to be off to the races. Chubb’s a big strong back, but he also has unbelievable speed and a second gear where that play exhibited that as he raced by the defense. It’s the longest touchdown run in Browns’ history and that says a lot considering past greats like Leroy Kelly, Earnest Byner, Greg Pruitt and Jim Brown. 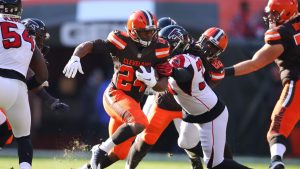