In this series, I will write a “Need To Know” article for every Cleveland Guardians playoff game, telling you everything there is after the game ends! The Guardians lost against the New York Yankees in Game 5 of The ALDS, 5-1  in New York. It, unfortunately, ends the series with the Yankees winning it three games to two. Thank you all for reading each article; I am certainly disappointed it’s over. However, I will still be writing these after Browns games.

Aaron Civale Was a Train Wreck

Manager Terry Francona decided to go with Aaron Civale to start Game 5. He only retired one hitter and gave up three earned runs before being pulled. Ironically, his only out was a strikeout of star Aaron Judge. Many will wonder if the team should’ve gone with a bullpen game or Shane Bieber on short rest.

Can’t Win on One Run

Even with the pitching crisis, the offense was only able to manage a single run. That’s just simply not going to win games, regardless of who’s pitching.

After Civale was pulled, for the rest of the game the bullpen only gave up two runs in 8.2 innings pitched. It gave the team a chance even after the horrific start. Just no offense…

The Play That Wasn’t Challenged

In the 4th inning, Andres Giminez grounded to first and the first baseman dove to tag the bag for the out. While it was called out, clearly Giminez was safe sliding to touch first. However, Francona never asked for a challenge. Does a runner on first with two outs down 4-1 change the game, probably not. Even so, it was a play that needed to be challenged. You just never know.

So Many Missed Opportunities

The Guardians had eight runners left on base. The team actually out-hit the Yankees 8-6 in the game and still lost by four runs. It just goes to show how important it is to capitalize with runners on base. It’s why New York is heading to Houston and Cleveland to uhhh…Cleveland.

The Yankees would’ve had to rely on a bullpen that was short on rest and also just not as good as the Guardians pen is. Cleveland had their guns rested and ready to go. If the game was just simply played late instead of postponed until today, who knows how different the outcome would’ve been?

Look Forward to Next Season

This team is young and exciting. Despite losing to the Yankees in the playoffs, “there’s always next year” as they say. I expect this team to make it to the playoffs, once again. Maybe next year we can beat New York in a rematch…who knows? The loss tonight sucks, but the future is bright.

It’s painful being a Browns fan, so get excited that a young and talented Cavs team starts the regular season tomorrow in a game in Toronto against the Raptors. Those battles will be fun to watch. 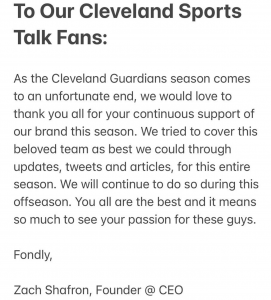