That’s always the joke when the Cleveland Browns are on the bye week. After the impressive Week 8 win over the Bengals, 32-13, the Browns were off Week 9 (Sunday the 6th) and will play once again against the 6-3 Dolphins. A road game in Miami on Week 10 (Sunday the 13th).

The win against the Bengals pushed the team’s record to 3-5 on the season. It almost felt like a *must-win* because going into the bye with a 2-6 record did not look good for the season.

Now, 3-5 isn’t sexy or anything either, but it gave the team/fans some hope.

Looking towards the Week 10 matchup, what did the bye week do for this team and what needs to be done moving forward?

Looking at the team’s injuries, it doesn’t appear everyone is back. TE David Njoku is still a maybe (ankle), yet Denzel Ward was out there practicing with concussion symptoms. He says he’s playing. This extra week off will be crucial for these players in their attempts to return to action against Miami. 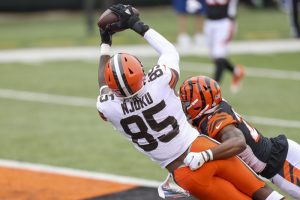 It also gives the team and coaching staff extra time to reflect and analyze these Browns. What happened that caused them to lose five games? Why was the team was so successful against Cincinnati and what can be done moving forward?

The Browns need to make the proper adjustments and realize that because the team already has five losses on the year, there is very little room for error once play begins again. At this point, the playoffs are not impossible. However, it’s going to take quite a run starting with a win on Sunday.

One other note is that Deshaun Watson returns on Week 13 (December 4th) against the Texans on the road. That is creeping up fastly…

The Dolphins played the Bears while the Browns were on bye. Despite the fact they won by a score of 35-32, the point is the Browns got an extra week of rest their opponent did not.

On a completely different note, it was cool of the NBA schedule makers to have a Cavs game on Sunday the 6th at 3:30 p.m. against LeBron and the Lakers. A 114-100 win on the road, by the way. While it’s hard to replace our Browns on a Sunday, this was close.

Luckily, our Brownies will be back this week. It’ll be a tough road test against a team like the Dolphins that are 6-3.

A win? And everyone is talking about how the 4-5 Browns can make some noise moving forward.

A loss? It’s not technically over but…yeah. Can’t lose.