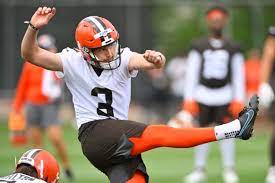 Yes, he did miss one kick during the game (58 yards). Even so, he was hitting from 70 yards during warmups. Not too concerned with the miss! This kid clearly has a leg and it looks like he’ll be the kicker for many years to come. He was good from 57 and 46 yards later in the contest. The kicker doesn’t matter until he does…

NEXT PAGE: CliCK HERE TO VIEW WHAT YOU NEED TO KNOW!!!