After announcing the signings of Admir Suljevic, Ma’Cain Spragling and Kurt Raney (covered HERE and HERE), the Crunch continue to add quality to its ranks with the addition of goalkeeper Marijo Musa. The 24-year-old was born in Kiseljak, Bosnia and Herzegovina but raised in Cleveland.

As a youth, Musa played for various teams in different countries. Locally, he played with Eastlake North High School and the Internationals U.S. Soccer Development Academy (USSDA). Musa’s goaltending talents led to his being named among the Top 50 soccer players in the United States.  Eventually, he made his way onto the Under-17 USA Men’s National Team.

From there, he moved on to Pachuca F.C. Academy of Liga MX in Mexico. In 2014, after his stint with Pachuca, Musa made his way to Germany to play for FC Erzgebirge Aue in Bundesliga 2 (the second division of professional football in Germany). 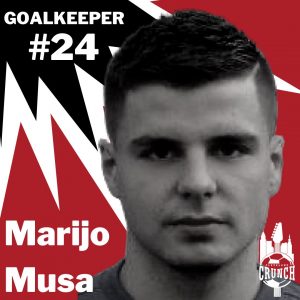 Returning to the shores of Lake Erie, Musa came home to play with AFC Cleveland and Cleveland SC of the National Professional Soccer League (NPSL). While with Cleveland SC, he impressed owner/president Samuel Seibert so much that he named Musa to his All-Time Greatest Cleveland SC team. Of Musa, Seibert says, “Marijo has had caps with the USSDA when younger and shows that composure in the net for the majority of our matches. Marijo has the most clean sheets in our history.”

The Crunch are banking on the 6’1 Musa being a wall in goal, frustrating the opposition and inspiring the fans with big save after big save. The 2021 campaign cannot get here soon enough!

Check back here next week for news about the tryouts and so much more!
*Image used with permission of the Cleveland Crunch.

Get to Know the Crunch, part 3