March Madness in college basketball is in full effect as we get ready for the NCAA Tournament brackets to be released. I always get so excited this time of year, like many of you, to cheer on our favorite teams and enjoy the ups and downs of the tournament. I’ve also had a few more personal moments involving my own kids and the tournament and that makes it always a more powerful memory of cheers and tears!

A memory photo of my youngest son Grant and I, in my car, appeared on my Facebook page the other day. We were on our way to Cleveland, Ohio for the MAC Women’s Basketball Championship five years ago. The story behind the photo always gets me thinking about my kids and that moment in time that will live with me forever.

The big game was scheduled for a Saturday morning. But before getting to that game, the Bulls had to beat the Akron Zips in the semifinal game the previous day. I was still living in Wichita, Kansas, at the time. I was a school counselor and watched the game from my office on a laptop computer. As the game got close to the end, both teams were battling it out. This father was sweating bullets trying to keep my composure from afar as I watched my daughter and her team. In the end, my daughter was a big part of that win and helped secure the victory with a big rebound and put-back basket in the closing seconds. The unusual cheering coming from the school counselor’s office was probably a bit too much and drew the attention of my many colleagues. Though a bit out of professional character, the excitement and loud cheering in the school offices that afternoon was well worth it. My kid was going to the NCAA tournament!

That same day, my other son Alec was scheduled to take a school trip to France and was departing for the trip midday, which was right after the conclusion of the basketball game I’d just watched.

So, like any father of the year (joking!) would do, I took Alec to the airport first and saw him off. He wanted to see his sister play in the championship game, but a chance to travel to a childhood dream location was too much to pass up. After the drop-off at the airport, my other son Grant and I began our road trip journey of 16 hours to Cleveland. Grant and I had made this trip many times before because the grandparents lived in Ohio, but this trip was a bit more special and also pressed for time as the championship game tipoff was scheduled for 11:00 A.M. Stopping at a hotel in Terre Haute, Indiana to catch a few hours of sleep, we arrived at the MAC tournament for the game 30 minutes before the early tip that Saturday morning. We had made it! Accomplishment #1 was complete. Now, could the Bulls and my daughter win the game?

What happened next was a moment in time that will live with me forever. The game was extraordinary, with both teams going toe-to-toe. Eventually, the game went to overtime. With the game tied in the closing seconds, Buffalo’s point guard, Stephanie Reed, got a shot off at the buzzer that banked in off the backboard and magically went in. The Bulls were going dancing and the pandemonium that ensued was more than this father could handle. Having traveled halfway across the country overnight, my tears of joy brought me to my knees as I thought about my daughter’s commitment and her team’s desire to play together to get to this moment in time.

Moments like that are what make this time of the basketball season so special. With no tournaments a year ago because of Covid, and this college basketball season still being affected by the virus, crowning a champion will be very rewarding to those teams. But getting the opportunity for these young college athletes to experience those thrills of victory and the heartache of defeat is so important. And like my own experience as a father of a college athlete, these experiences also hold a special place for family, friends and fans alike.

Enjoy the weeks ahead as you cheer on your alma mater or your kid’s team or the teams you’ve cheered on since you were a kid yourself. There’s nothing quite like March Madness! 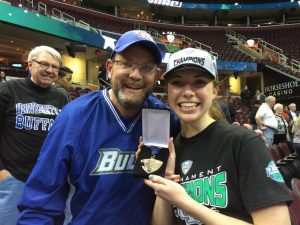 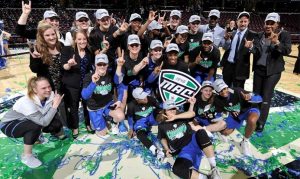