Let me preface this article by saying I know LeBron James plays on the Los Angeles Lakers now and not the Cleveland Cavaliers. However, we all remember 2016 and the classic years with LeBron in Cleveland. He’ll always be an icon in The Land.

However, controversy with LeBron and Browns quarterback Baker Mayfield is aplenty.

James had two fans ejected in a game against the Pacers recently. Rumor has it the fans were saying “I hope Bronny dies in a car accident.” 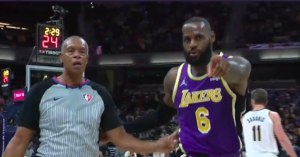 Look, I don’t have a child, but that language is horrible and I would be pissed if someone said that about a family member of mine.

Then, here in Cleveland, Baker Mayfield refused to speak to the media after the win over the Detroit Lions. It became a huge deal with much speculation on the reasons why not. He did eventually speak the next day and said that he owes the media nothing.

Ok. The stage is set. Why do these two incidents correlate?

Well, it brings up this idea on what professional athletes are obligated to tolerate. After all, these players make millions of dollars to provide the service of playing a sport. What more comes along with that job? These two didn’t want to hear it from the fans or the press.

With LeBron, where is the line drawn? These fans did pay money for tickets to come to the game and there are countless people that are yelling and screaming insults aplenty. How far is too far? Should LeBron have just ignored it and played the game?

With Baker the question became what he has to answer to as a quarterback of the Browns. Must he talk to the media always and respond to every and all questions by the media?

The ironic part with both of these players is they won each of the games these incidents occurred in.

I wrote an article on the Baker media incident and you can read it HERE. However, he would’ve saved a lot of trouble if he just spoke to the media on the day of the game (he did speak the next day).

With LeBron, what those fans were saying was terrible. However, I think ignoring the fans and playing the game would’ve saved a lot of trouble and headlines for LBJ himself, the NBA as a whole etc.

Both of these great players went against the grain. Did the outcome of their actions really help them in the long run? No.