The Los Angeles Lakers won their first NBA title in a decade and their seventeenth overall which ties the Boston Celtics for the most championships. Most people don’t want to hear or read this, but the key to the Lakers winning this championship was LeBron James.

Before the season, I said the Lakers would win the title. I also said that if LeBron was going to “steal” a championship that this would be the year to do it. Now for those that are wondering how one can possibly “steal” a championship? Let me explain. When one steals a championship in sports it means that a multitude of factors and the level of unpredictability is so high that not even Vegas can predict who will win or what will happen. The Covid pandemic gave us just that.

With the unfortunate passing of Laker great Kobe Bryant back in January, the Lakers were obviously going to dedicate the rest of their season to Kobe. As the season unfolded in the bubble one could see that LeBron was more focused than ever. The team around him got progressively better and dominated the rest of the season and in the playoffs. Add the fact that LeBron was yet again snubbed for the regular season MVP trophy and that only added fuel to the fire.

The Lakers dominated the Heat in Game 6 of the finals and showed why they were the team who earned the trophy. PF Anthony Davis walked away with his first title and for LeBron; it’s his fourth. As a former player, I personally understand what this season meant to not only LeBron and the Lakers, but the entire NBA. I also understand how LeBron must feel after winning this title. In reality, yes, LeBron did steal this title, but not for the obvious reasons. This was personal on so many levels that most of the other sports outlets and writers won’t even begin to understand. Not only was this a big “stick it up your nose” to the doubters, but this was also a glimpse of greatness not often seen in the world of sports.

With this championship, LeBron has now won a championship in both the Eastern and Western Conferences. LeBron himself is also the first player in NBA history to win the finals MVP with three different teams (Lakers, Heat, Cavs). This further proving all of the doubters and sportswriters who said he couldn’t do it in the west wrong. This was a statement to the world that he still has it and as long as he still is playing at a high level, he will continue to be the best player in the world of basketball.

I’m quite positive that somewhere alone in the locker room, LeBron and Kobe shared this title together and hi-fived one last time. 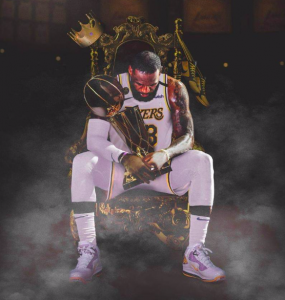 Without OBJ: When a Team Can Prepare – It’s Different