If there’s one thing we learned from this week against the Tennessee Titans, it’s to temper our expectations of this year’s Cleveland Browns. Yes, I still believe they are superbly talented and they have everything necessary to make a run at the playoffs. However, despite all the hype, they are still a very young team with a first-year head coach.

In what was one of the most disappointing opening games in recent memory, or even in franchise history for that matter, the Browns lost 43-13 to a much more disciplined Tennessee Titans team. The Browns have a lot to work on heading into their matchup with the New York Jets on Monday Night Football where we’ll see what they’re really made of.

The first quarter started off fantasticly for Cleveland; the sellout crowd was in full force and the Browns started off the game with a tremendous touchdown drive. The Browns picked up huge chunks of yardage and they looked essentially unstoppable. Odell had two catches, Jarvis made a nice play on an orbit bubble screen, Chubb had a nice run and Higgins continued his connection with Baker with two catches of his own. On Higgins’ second catch, Baker made one of the better throws of the day up the seam between about five Titans defenders for a 35-yard gain on 2nd & 23. The drive was capped off by a four- yard touchdown run by Dontrell Hilliard where the offensive line seemingly dominated up front to punch it in. Then, of course, K Austin Seibert had to go and miss the first extra point of the season, which should justifiably really worry fans after last year’s kicking debacle.

After that first drive, though, there wasn’t much else that really happened. The Browns gave up a field goal on their first defensive possession where they completely shut down the run. They gave up a big play to AJ Brown, but other than that, the defense looked great that drive. On the Browns second offensive drive, a special teams penalty and poor offensive line play, namely by Chris Hubbard, forced them to punt from their own six yard line on 4th & 28. The Browns defense managed to force a three and out, but they had to start the next drive backed up at the seven because Dontrell Hilliard just would not catch a punt. Instead, he’d let it drop and stand right next to it just waiting for a bad bounce to spell disaster.

The Browns final drive of the first spilled into the second quarter, but it quickly stalled after a nice hookup from Baker to Njoku. Gillan pinned the Titans back inside the 20 to the 13, but this is where things started to really get ugly. The Browns committed four penalties for 40 yards and two of those penalties were on crucial 3rd downs. Damarious Randall was called for a pretty bogus defensive holding penalty on 3rd & 10 on what looked like a gorgeous pass breakup and then Sheldon Richardson unacceptably jumped offsides on 3rd & 4 at the Cleveland 11 to give the Titans 1st & goal, which they capitalized on with a touchdown run from Derrick Henry from the one. Also, Myles Garrett absolutely cannot get frustrated enough to throw a punch like he did early on in this drive because if he’s ejected, the defense is in big trouble.

The rest of the half was pretty horrible for Cleveland as Freddie Kitchens’ play calling was surprisingly awful and predictable. That combined with the team showing zero discipline with penalty after penalty, made it difficult for the Browns to be successful at all, but they managed to keep themselves in the game only being down six points by the end of the half. Kitchens was calling way too many pass plays and he was trying to run play action without even establishing the run first even though Nick Chubb looked great in his limited opportunities. Chubb had a nine-yard run to set up 2nd & 1, which the Browns followed up with two straight incompletions for a three and out. Honestly, just hand the ball to Chubb, let him get the first and then go ahead and open the playbook. 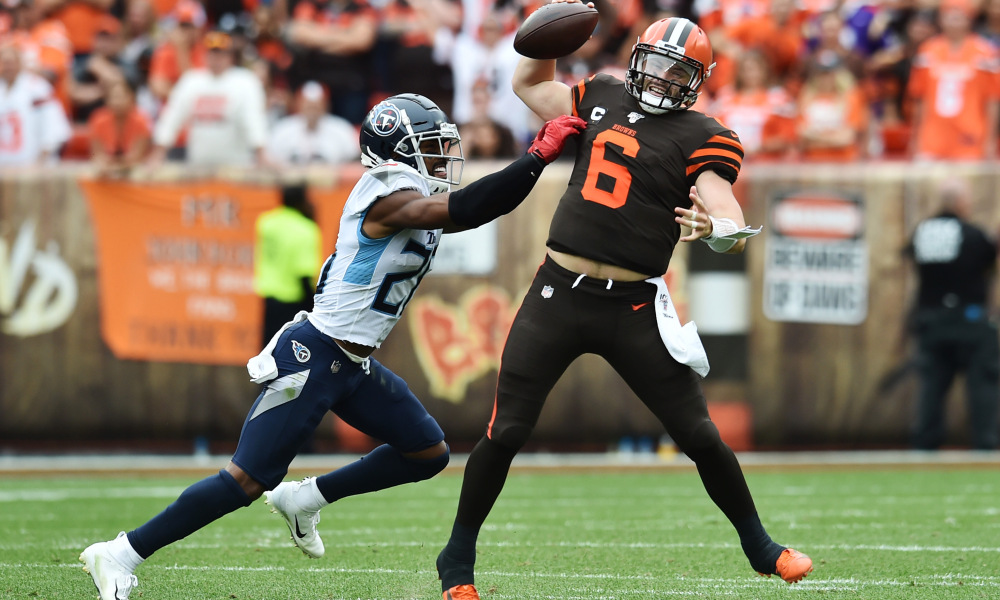 The defense did respond with Morgan Burnett making a huge play as he sacked Mariota to stall a promising drive. Too bad the Browns decided to kill their next drive with Greg Robinson inexcusably kicking Kenny Vaccaro in the face for no reason whatsoever, which was followed by his ejection and another three and out. However, the defense yet again stood strong as Myles Garrett had his first of many sacks on the year to answer with a three and out of their own.

Unfortunately, Dontrell Hilliard again decided not to catch the punt, but to stand right next to the ball and watch it roll slowly to their own three-yard line. Chris Hubbard continued his horrible game getting dominated by the ageless Cameron Wake with a false start on the first play and then giving up a safety on the very next where swing tackle Kendall Lamm was injured. It looked quite severe on replay as his leg was rolled up on from behind and bent awkwardly under the play, and to top that off, Baker Mayfield was even shaken up as well. Even more concerning was the fact that the play they ran on the false start was the exact same play they ran on the safety just flipped. It definitely was not Freddie’s shining moment to call the same slow-developing, play-action, deep pass play call twice in a row backed up on their own goal line.

The defense held strong one last time as they made Mariota actually sit in the pocket and play quarterback, which lead to three-straight incompletions after a first down to Delanie Walker on the first play. To end the half, the Browns looked pretty solid, but the drive was killed by yet another penalty; this time it was a questionable offensive pass interference by OBJ. The nightmare half finally ended after a short completion to Odell, but this was just the beginning of Cleveland’s problems.

The second half didn’t exactly start off as planned as AJ Brown made another huge play with a 51-yard catch-and-run on the first play of the half. Luckily, Larry Ogunjobi responded with a sack that and Christian Kirksey made a beautiful open field tackle to hold the Titans to a 53-yard field goal after the big play. The offense picked up a couple chunk plays after a first down catch by Odell and then a 15 yard run by Chubb, but the drive quickly stalled after Chris Hubbard committed a holding penalty. It’s pretty difficult to score points when the team is constantly facing 3rd & 12 or more, but at least Jamie Gillan has another nice punt to the six yard line. From there, the Browns forced a three and out after another terrific play by Christian Kricksey on 3rd & two hitting Dion Lewis immediately after catching a flat route for a two yard loss in space.

After three penalties in a row, the Browns started the drive with a 1st & 25, which lead to a 3rd & 16 where Baker was able to find an open Jarvis Landry at the first down marker who then picked up a few more yards for a 23-yard gain. Baker continued to dominate the drive with another 34-yard strike to Jarvis on the right sideline to set them up with a 1st & goal. Freddie Kitchens called a play with a beautiful design, which lead to an easy touchdown catch for David Njoku over the middle. Austin Seibert made the extra point this time making it a 15-13 game with just over two minutes left in the third quarter. Baker was 5-5 with 74 yards and a TD on that drive and the Browns looked like they were finally waking up a little bit and ready to make a push for the win.

Obviously, we all know that didn’t happen, though. In fact, the game really got out of hand from this point forward. On the very first play of the Titans next drive, Christian Kirksey was blocked nearly identically to how Greg Robinson blocked when he was penalized for a blindside block during the 75-yard screen pass for a touchdown where Derrick Henry caught he ball and sprinted in a straight line up the left sideline all the way to the end zone making it a 22-13 game following the extra point. 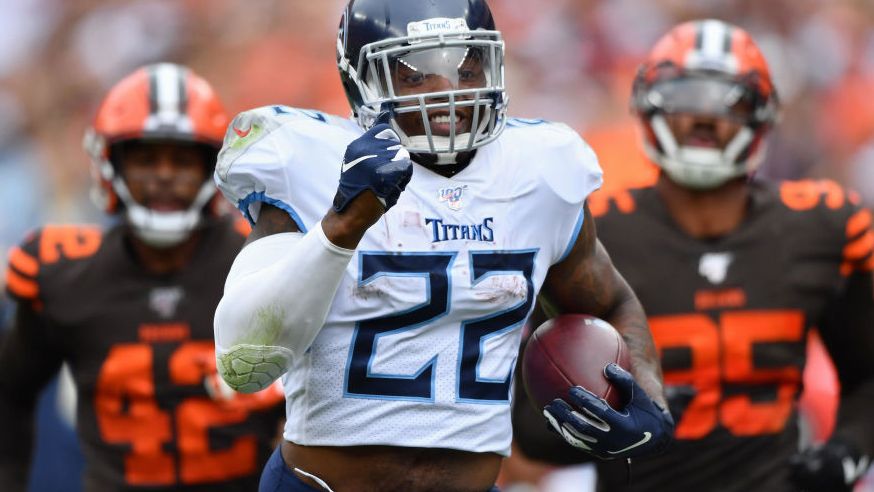 From this point on, there’s really not much to talk about because the Browns were flat out embarrassed after they made it a two-point game. The Titans scored 28 unanswered points with 21 of them coming during the fourth quarter. Baker began to force the ball to his star receivers, which lead to three fourth quarter interceptions, one of them being a pick-six. The one drive he didn’t throw an interception during the fourth, he was sacked twice consecutively leading to a 3rd & 26 and then during the other, they ran the ball every play. The other two touchdowns the Browns’ defense forfeited were both short passes over the middle to Delanie Walker after surrendering short field off of the interceptions.

All in all, the Browns lacked discipline with 18 penalties for 182 yards, which put them in way too many 3rd & long situations. They actually ended the game with more yards than the Titans, but the penalties really crippled them offensively and with field positioning. No team is going to win games committing that many mistakes and the Browns are likely in for a long week of practice to clean everything up. Beyond being significantly more disciplined, the Browns play calling must be improved on both sides of the ball. Their offense was far too predictable and they tried to run too much play action without previously establishing the run despite Nick Chubb playing well. Comparatively, their defense blitzed a bit too much for my liking, which lead to some big plays. Against the Titans, the strategy should be to make Mariota actually stand in the pocket and beat you while he’s being harassed by the monster front four.

Hopefully the Browns will correct many of these issues, which would lead to a much improved Week 2 showing against the Jets on Monday night.

What are your thoughts on the Jadeveon Clowney re-signing? #Reply

TOP 10 Things To Be Excited About This Browns Season!