LeBron James and Kyrie Irving are still making news together despite the fact that they haven’t played on the same team since 2017. Of course, these stars are best known in Cleveland for winning the 2016 NBA Championship. Each had his respective moment with LeBron’s Block and Kyrie’s Shot that helped the Cavs beat Golden State. That will never be forgotten regardless of the news that comes about here in 2020 and beyond…

Now a member of the Brooklyn Nets, Kyrie said about fellow teammate Kevin Durant, “This is the first time in my career where I can look down and be like that mother fucker can make that shot too.” LeBron responded by saying, “I was like damn…the whole time I was in Cleveland I only wanted to see [Kyrie] be the MVP of our league. I only cared about his success. It kind of hurt me a bit.”

First, let’s make it clear that I am not denying Kevin Durant is one of the greatest to ever play the game of basketball. He is an absolutely incredible player and has had an outstanding career.

However, why does Kyrie have to do this to LeBron?

Everyone knows that quote was more of a shot at The King than any type of real praise for KD. Take a look at this: 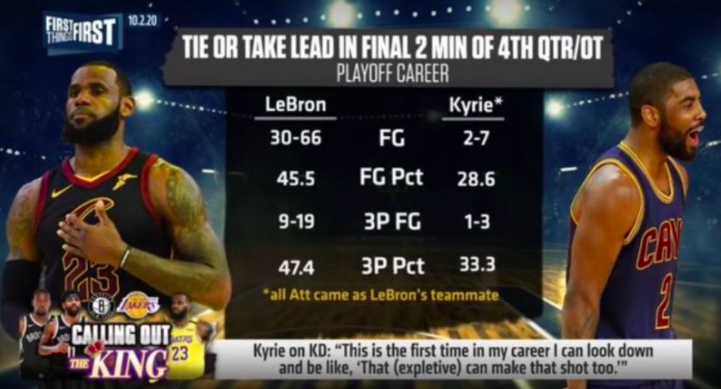 Those are some solid numbers for LeBron.

It is simply disrespectful for Kyrie to take these hits at LBJ. The man that helped him win his only NBA Title to this point since being drafted by the Cavs in 2011.

Cleveland fans don’t like to see this between two players that are legendary in these parts. Each had a huge contribution to winning it all. Yes, both have moved on, but why must these types of issues arise? Where Kyrie is trending on Twitter, LeBron is hurt by words and nobody wins.

What we want as Cavs fans is for in 2036, the franchise to be able to have a “20-year championship reunion party.” Right now, it’s looking as if the star players wouldn’t attend due to BEEF with each other.

How to fix the problem?

Well, Kyrie basically just needs to pay his respect to LeBron and everything he did for him in Cleveland. Make up for some of these comments and show that appreciation. LeBron has already said how much Kyrie and his success meant to him in Cleveland.

The 2016 Cavs NBA Title is the best moment in Cleveland. Let’s not taint it with the best players ending up hating each other.