Let’s start this article off with the two main points every reader should know:

– I am Jewish. My grandmother is actually a Holocaust Survivor (great-grandparents were killed). My beliefs are reform meaning I am not very religious nor do I practice many of the customs either. I do take pride in being Jewish, regardless.

– I am a big Kyrie Irving fan from his time in Cleveland with the Cavs (2011-2017). After all, he hit the biggest shot in Cavs history to secure a Championship for Cleveland.

Thus, I certainly have some conflicting feelings about this situation. Let’s go over what happened.

Essentially, Kyrie, now a member of the Brooklyn Nets, posted a link on his Twitter to the movie “Hebrews to Negroes: Wake Up Black America.” It has antisemitic tropes about Jewish people lying about their origins.

No, Kyrie should not have posted the link to his Instagram. Does that mean he believes or endorses everything that is in the film? Absolutely not. Hey, I like the cartoons Family Guy and South Park, as well as shows Curb Your Enthusiasm and Two and a Half Men. I’ve posted about those shows on my social media. Does that mean I “endorse” everything that occurs or is said in them? Of course not. It allows the followers to come to their own conclusions.

Kyrie is stubborn. A big problem of his, honestly.

Via NYT: When Irving was asked if he had any antisemitic beliefs, he said he respected all walks of life.

“I cannot be antisemitic if I know where I come from,” Irving said when he was asked to answer the question with a “yes” or “no.”

All Kyrie had to do in the media session was say no to the question and none of this would be an issue. However, he had to go on this diatribe about how he respects all walks of life. And that’s a great thing, Kyrie. Just not what the people wanted from you in that specific context. 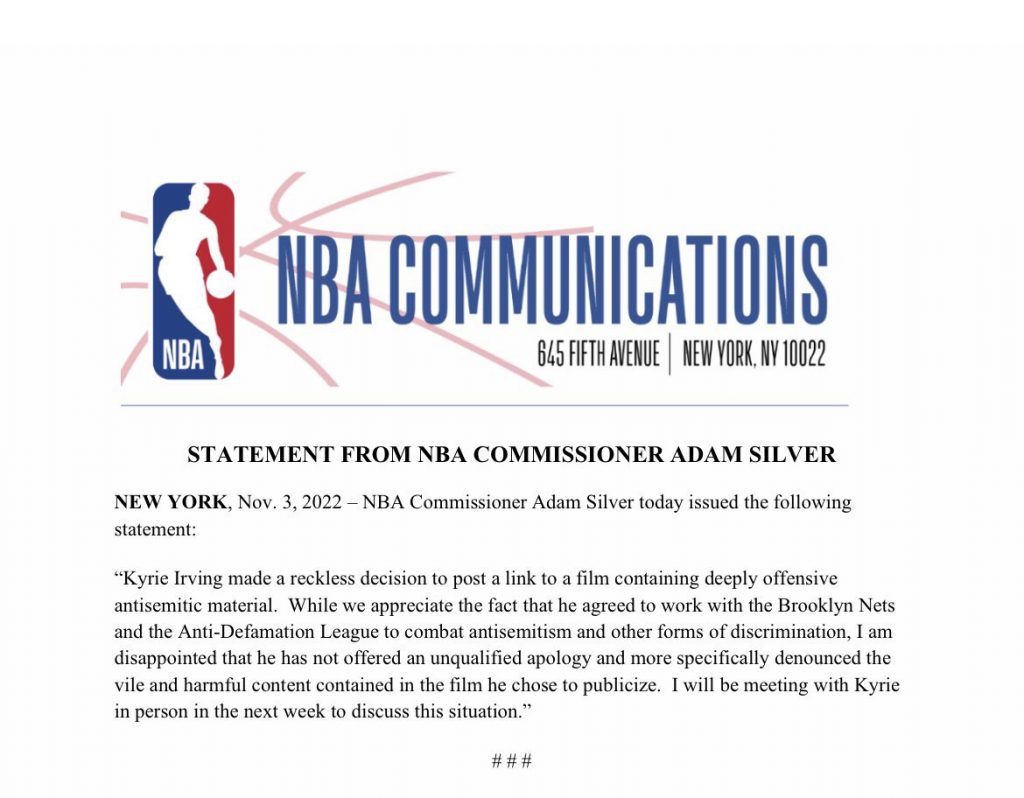 Why is the NBA wrong to suspend Kyrie Irving for 5+ games?
Look, this was a minor story until it blew up after the suspension. This article is an example of that itself. I would not be writing about Kyrie or his actions. Fans are certainly looking to view the said movie, “Hebrews to Negroes: Wake Up Black America” because the suspension became news to the public.
Kyrie did delete the Tweet. What else did he do?
Irving wrote in an Instagram post the following message: “To All Jewish families and Communities that are hurt and affected from my post, I am deeply sorry to have caused you pain, and I apologize. I initially reacted out of emotion to being unjustly labeled Anti-Semitic, instead of focusing on the healing process of my Jewish Brothers and Sisters that were hurt from the hateful remarks made in the Documentary. I want to clarify any confusion on where I stand fighting against Anti- semticism by apologizing for posting the documentary without context and a factual explanation outlining the specific beliefs in the Documentary I agreed with and disagreed with. I had no intentions to disrespect any Jewish cultural history regarding the Holocaust or perpetuate any hate. I am learning from this unfortunate event and hope we can find understanding between us all.”
Via ESPN: “A day earlier, Irving and the Nets had announced, in conjunction with the ADL, that each would be donating $500,000 to anti-hate causes.”
—
From a basketball standpoint:
The Nets themselves are currently 2-6 on the year and are certainly struggling. This suspension isn’t going to help the 13th-ranked team in the Eastern Conference without him on the floor for the next five games. Irving, now age 30, averages 26.9 points, 45.3% shooting, 5.1 rebounds and 1.5 steals.
—
Ultimately, I still love Kyrie for his time here in Cleveland even after this whole situation. I think we all make mistakes, some bigger than others and Irving should learn from this and move on in the future making smarter posts on social media. I feel he has taken initiative to right his wrongs with the Instagram post and the donation.
Congratulations to the NBA/Nets for making this a huge deal. The thousands of viewers seeing this movie now are all cause of YOU.