What a difference a week makes. The Tribe had been on an 0-8 losing skid and things felt dismal. Fast forward to last night’s game against the White Sox which ended in dramatic fashion. The battle went into the 10th inning and Jose Ramirez delivered a three-run walk-off homer that spread excitement all through Northeast Ohio.

The condensed baseball season has been odd, to say the least. It feels like it should be June and not the end of September. There has been much debate on if the World Series title will mean the same this year. I say “YES” actually I scream “YES!” With the schedule allowing for barely a day off, all the teams had to sprint to the end.

The Indians have dealt with many obstacles. Their Skipper, Terry Francona, has been out and Sandy Alomar has stepped in. The team also had to handle the Mike Clevinger and Zach Plesac debacle of breaking league COVID protocol. Clevinger was traded shortly after but the team kept plugging away.

It’s as if something has changed for the Tribe in the past few games. That fire, that passion, that heart the fans love about the Indians feels like it’s back. This playoff clinch was different in the sense that this entire year has been different. The playoffs are going to be different. The Wild Card will now be a three-game series instead of just one do or die game.

The shirts that the team was wearing during the post-game celebrations read “Respect Cleveland” and that’s powerful. Through the inconsistent offense troubles and the other roadblocks at the end of the day, we’re Cleveland. This city has one of, if not the greatest fan base in the Major League. So, if you’re excited and hopeful that they can win it all, you should be. 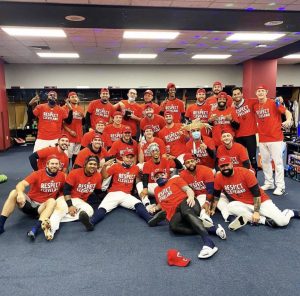