Backs against the wall.

That is an accurate way to describe both the Blue Jackets’ and Monsters’ situations right now. Last night in Game 3 of the AHL semi-finals, the Toronto Marlies shut out Cleveland with a tally of 2-0. While the Monsters pretty much controlled the flow of all things against Syracuse in the first round, Toronto has dominated Cleveland in the second. The only time the Monsters looked like they were in the running against the Marlies was in Game 2 when we saw regulation end at 3-3, only to have Toronto left winger Michael Carcone score the game-winner a mere minute into overtime. 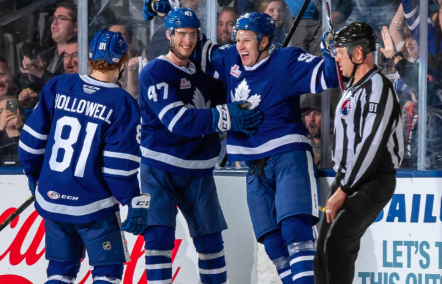 Game 4 will be played in Cleveland on Tuesday night.

Onto a series that has been much more even-keeled, Boston and Columbus face off in Game 6 tonight with a 7:00 pm puck drop. The Blue Jackets can absolutely not afford to play behind like they did Saturday night. Yes, that was some miraculous scoring they completed to come back from a 3-1 deficit, only to have David Pastrnak score with about a minute and a half left in regulation to send the Bruins on to a 4-3 victory, tipping the balance of the series in their favor at 3-2.

Jackets forward Artemi Panarin turned the puck over in that third period of Game 5 which allowed for the go-ahead goal by Pastrnak. Before people lose their minds over this, let me remind you that Panarin has been the primary offensive threat for Columbus with five goals and six assists. True, it is a mistake that should not have happened, but I forgive the guy. What is killing Columbus right now, aside from a strong Boston defense, is the fact that two of their stars have been virtually non-existent on the scoring front.

Second-year standout Pierre Luc-Dubois has had a mere two goals between the Tampa and Boston series. Meanwhile, regular season team scoring leader Cam Atkinson is right there with him, also with an anemic two goals between both playoff series. Atkinson had 41 regular season goals, which has obviously meant nothing here. While we are on the subject, it would also be nice if center Ryan Dzingel, acquired by Columbus from Ottawa right before the trade deadline, would do something as well. Dzingel has, wait for it, one goal and no assists in the nine games between the Lightning and Bruins series.

I know that it is easy for me to sit here and type this stuff out, citing how lackluster these numbers are when this group if staring down a very rigid defense and one of the best netminders in the game in Tukka Rask. Nevertheless, my job is to create articles and theirs is to score goals. Here is the article. Now let’s see the goals.

On a final note, before we prepare for Game 6 tonight, Blue Jackets coach John Tortorella made another guarantee saying his team will be back for Game 7.

You did that last year against Washington, Torts. We all know how that ended. He’s writing a check his mouth can’t cash. If they win tonight, brilliant. Great statement by the coach. If they lose, what is his responsibility to serve and back up the guarantee? Free tickets? His resignation?

The Panarin/Bobrovsky clock is ticking a whole lot louder now. This is the best team Columbus has ever put on the ice in the history of the franchise and it is a foregone conclusion that the ‘19-’20 roster will not be nearly as strong. There is no time like the present to dig deep into their hockey souls and fight with everything they have left.

Seth Jones and the State of the Jackets