Ok, last week I said this night game against Rutgers was a trap game because traditionally the Buckeyes don’t play well in night games at home. Then, I had to remember that it was Rutgers.

To make a long story short. This game wasn’t even close. The Buckeyes made their former defensive coordinator Greg Schiano’s night in the “Horseshoe” a living hell as the Buckeyes gave him a welcome back present he won’t forget.

The Scarlet Knights would make it a fight for the first five minutes of the game. Then, as a football and a big ten fan, you have to remember that once the Buckeyes get the ball the talent on each team is totally different.

I’ll save you the drama on this one.

By the time halftime rolled around the score was 35-3 in favor of the Buckeyes and quarterback Justin Fields had already accounted for four total touchdowns. In the second half, it was more of the same as the Buckeyes would continue to beat on the Scarlet Knights with extreme malice. When it was all said and done, the Buckeyes would win the game, 49-27. Justin Fields would throw for 314 yards, five touchdowns, and no interceptions. Buckeye running back Master Teague would add a rushing TD as well. The defense would force two turnovers as well.

Now, I know what you’re thinking. “The score was 49-27. That means Rutgers at least put up a fight, right?” Wrong! Keep in mind I did mention that the Buckeyes had a comfortable 35-3 lead at halftime which means in the second quarter alone the Buckeyes scored 28 unanswered points. Rutgers didn’t even fully sniff the end zone until all of the starters were taken out and it was garbage time. Rutgers was put out of their misery early and it showed on the scoreboard. 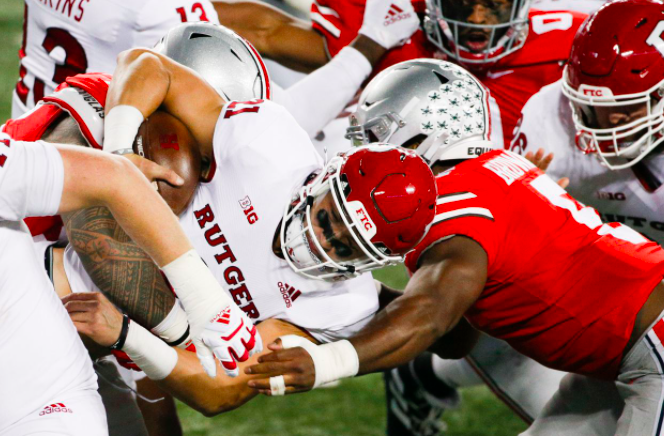 This week, the Buckeyes will take a trip to good old Maryland to take on the terps who surprisingly got what may be their biggest win of the season against a sketchy Penn State team, 35-19. The Terps scored the most points ever against the Lions in the series. Don’t get your hopes up because the Lions still lead the series between the two teams by miles.

Although Taulia Tagovailoa (yes, the little brother of Dolphins QB Tua Tagovailoa) played an excellent game against the Lions, do not expect him to have the same luck against the Buckeyes.

FINAL PREDICTION: Before winning the turtle against Illinois later in the season. The Buckeyes will kick the shell out of the Terps and not even the Teenage Mutant Ninja Turtles will be able to save Maryland. 50-21, BUCKEYES!