Isaac Okoro, the Cleveland Cavaliers’ newly-drafted swingman, signed his rookie deal this past Saturday. In the aftermath of the 2020 NBA Draft, the Cavs’ front office has received a lot of plaudits from the league, sportswriters and fans alike, for their selection of the former Auburn Tiger. The consensus thinking is that Cleveland drafted a player that possessed a skillset they were desperately lacking, rather than a player with general star potential. And that’s a tremendously astute, if not glamorous, decision to make.

The Cavs are deep into a rebuild that has, thus far, felt like it hasn’t gone much of anywhere since LeBron James’ second departure. Players like PG Colin Sexton and SG Kevin Porter Jr. have shown flashes of brilliance and hint at exciting futures in their NBA careers, but it has not been translating into many wins. The main reason has been woeful defense. Isaac Okoro represents a watershed moment in the Cavs’ rebuild, precisely because of what he brings on the defensive end. It gives the team a clear direction and more hope for the future.

During his lone season in the NCAA with Auburn, the 6’6 Okoro was a defensive terror. He averaged a modest 12.9 points on 51% shooting (a lackluster 28% from three), 4.4 rebounds and 2.0 assists, on the offensive end in 31.5 minutes played per game.

But it was his stellar and hard-nosed defense that earned him All-SEC Second Team, All-Freshman Team and All-Defensive Team honors. For reference, only five other players in the history of the SEC conference have earned all those awards in one season.

We can speculate on how good an offensive player Okoro could be if he develops a consistent jump shot and is able to augment his playmaking ability. But let’s be real. His value comes through his speed, athleticism and, most importantly, his eye-catching abilities on the defensive end. His serviceability as a player who can contribute off the ball when the team is on offense is an ancillary benefit.

Okoro was viewed by most as the best defender in the entire draft.

His ability to defend the perimeter was especially emphasized in scouting reports. He was often tasked by Auburn’s head coach Bruce Pearl with defending the opposition’s best player. His versatility as a defender is another talking point. In college, he was comfortable and effective, guarding almost any position on the court.

Now that his strengths and what he offers the Cavs are known, where will he fit in head coach J.B. Bickerstaff’s rotation?

The likelihood is that Okoro begins the season on the bench. He only played one season in college. The season is due to start on 22 December, which only gives him about a month with his new coaches and teammates in the preseason. The Cavs’ coaching staff will certainly want to ease him into pro game action.

Okoro will likely split time on the floor with PG Dante Exum and fellow rookie SF Dylan Windler (who spent last season injured). When Cedi Osman, who will likely start at small forward to begin the year, is out of the game, Kevin Porter Jr., whose status to begin the year is uncertain following weapons charges, did play at small forward last season, too. But that was not his natural position of shooting guard. He was forced to play out of position due to a lack of depth at small forward. But with Windler healthy and Okoro in the mix, it is likely KPJ will be able to revert back to his more familiar position on the court, freeing up more time for Okoro to get valuable minutes.

But Cavs fans will remember Cedi’s struggles as a starter at small forward last season. It’s likely Okoro will eventually work his way into a starting role there just on his defensive prowess alone. The Cavaliers were dead last in defensive efficiency this previous season. They also allowed the highest opponent field goal percentage and were 26th in the league in opponents’ 3-point percentage.

So the only way is up when it comes to Cleveland’s defense. The Cavs need a lockdown-style defender who can face off against opposing teams’ best players. No one on Cleveland’s starting five, last year, was that guy. Which is why Okoro will get significant minutes, early on, before transitioning to a starting role later in the season.

But what some people may overlook is how Okoro’s style of play complements what the Cavaliers already have on their starting five. In the backcourt, Collin Sexton and Darius Garland are guys who like the ball in their hands and have the high-volume scoring ability, both as slashers and shooters. Sexton averaged nearly 21 points a game and shot 38% beyond the arc last season. And his second-half showed signs of a player who had flipped a switch and was ready to take the next step in his pro career. Kevin Love is a stretch-four with a great three-point stroke at the corner, while Andre Drummond is a beast on the boards who often has his way in the post.

None are elite defenders, either in the paint or on the perimeter. Okoro plugs that gap. And letting Garland and Sexton continue to run the offense allows Okoro to perfect his jump shot and develop into a more complete player who can be more dangerous on offense.

The pick of Isaac Okoro at number five, with Toppin and Acdija still on the board, may not have been ‘sexy’, but it was necessary. The impact a player with Okoro’s skillset will have on a team like the Cavs, with their shortcomings, will be clear and unmistakeable the first time he steps onto the court. You can’t help but feel, now, that the rebuild will finally start to gather pace. 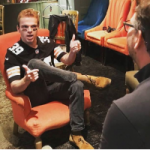