That’s what the average fan would say when someone presents this idea that it is good to lose. I, myself, will say that it is a crazy idea unless you’re talking about losing a game of pickup basketball to make the neighbors next door that are in kindergarten feel good for a day…

Well, the Cleveland Browns lost to the Kansas City Chiefs by a score of 33-29 in KC and it was certainly a disappointment. This is especially because the Browns controlled the game for the vast majority and it really looked like the team had a victory in place and just needed to make it to the finish line..

However, crucial mistakes such as a RB Nick Chubb fumble and a dropped punt (by the punter on the snap) let Kansas City come back and eventually take the game. 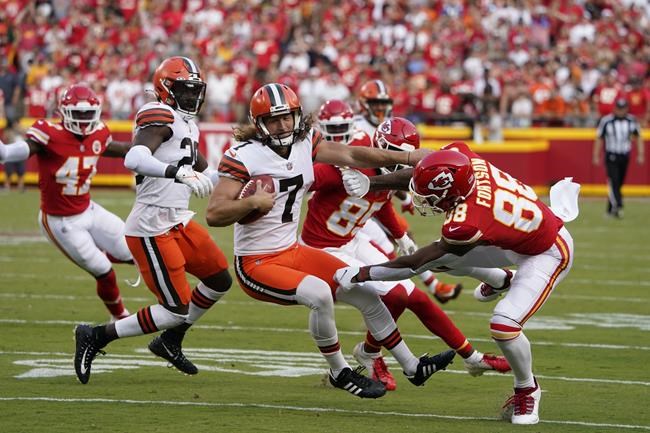 The Browns did battle the Chiefs like Rocky Balboa vs. Apollo Creed and that is impressive. A loss is a loss, certainly, but it would be worse to review if it was a blowout say 33-3 with the Chiefs winning.

What this game represents is a reality check for the Browns. If the team won this entire city would be on Cloud Nine and I’d be in Downtown Cleveland only wearing underwear and drinking beer right now instead of writing this article at home with my grandmother.

This Browns team is good.

Actually, they are great.

However, Kansas City is the best of the best and represents that work needs to be done.

Luckily, this wasn’t the Super Bowl. It was Week One and there are 16 more games to go before the potential playoffs. The Browns must learn from these mistakes, realizing that while there is so much hype for this team, it’s not a free pass to the playoffs.

Coach Stefanski is amazing and will take a ton away from this game and implement it to his squad for Week Two against the Houston Texans (first home game).

Now, I’m not a psychiatrist, but winning this game could have given the Browns a false sense of elitism and greatness that isn’t necessarily true…yet

A lot of Browns Twitter was tweeting out we will see the Chiefs in the playoffs. While this is a great way to look at the loss, the Browns must take advantage of all the time/games left in the regular season before that potential playoff game.

Then, the team can beat down Kansas City and actually WIN against them en route to the ultimate goal.

Browns: Take what there is to learn from this game and use it to your advantage in improving for the rest of the season.

This loss certainly stings, but it’s simply not the end…only the beginning.