Bieber fever is rampant, on Wednesday night, as the Tribe’s ace wins the coveted Cy Young Award. Not only did Bieber win, but he did so unanimously. This marks the first time an Indians pitcher has ever taken the honors with all the votes. The last time there was a unanimous honoree, in the AL, was when Justin Verlander won it in 2011 with the Detroit Tigers.

The American League results in order:

Bieber led the league in wins, ERA (1.63) and strikeouts, with 122 strikeouts in just a little over 77 innings pitched. He is the fifth pitcher in the Indians’ history to bring home the Cy Young Award. Now he joins the other four Indians’ winners: Gaylord Perry 1972, CC Sabathia 2007, Cliff Lee 2008, and Corey Kluber 2014 & 2017. Bieber is also the second participant in franchise history to win the AL Triple Crown, becoming a member of this honor class with Hall of Famer Bob Feller in 1940.

Bieber’s story is one of greatness.

It was just two years ago Bieber broke into the majors. At the start of 2019, he was the Indians’ number five in rotation, but by that summer he was holding the All-Star Game MVP trophy. It was as if within a blink of an eye Bieber was a star. With the team losses the likes of Corey Kluber and Trevor Bauer, Bieber stepped right into the number one slot like he belonged there and he did.

When Bieber was introduced as a Cy Young finalist. He had this to say:

“I used to be form of a late bloomer in high school, so I really feel like I needed to discover ways to pitch and let my stuff come to me, “But when it comes to growth, I would not commerce my course of for something. I felt like my early years studying learn how to pitch, studying learn how to change speeds and find the ball has paid dividends in the long term” 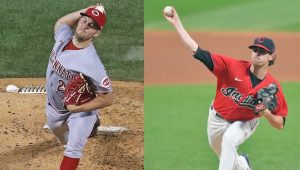 For Cleveland, having five Cy Young winners in the last 14 years is something to be proud of.