Since the return for Mike Clevinger was mainly centered around prospects, most people think the trade may only benefit the Indians in the long run, but there are reasons to suspect otherwise.

The obvious fact to point out was it quickly improved the team chemistry after the “incident,” which this article won’t go into. Though Oliver Perez was the vocal leader involving this issue, reportedly saying he would leave the team if Clevinger and Plesac rejoined the team (per Jeff Passan), it was clear many other players and personnel were not happy with the duo’s decision. Both Francisco Lindor and Adam Plutko spoke out on the matter. Plutko using some harsh words in a post-game press conference and saying

“(Clevinger and Plesac) hurt us bad. They lied to us.”

So it’s pretty clear that just moving on from Clevinger was probably a good move to begin with. 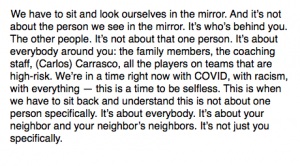 Though it may seem minuscule, adding Josh Naylor is still a slight improvement to the dreadful outfield the Indians currently have. Though many thought the Tribe were going to go out and try to trade for a big bat that could be a huge boost, at least they got some sort of upgrade. Josh Naylor has only hit .179 so far as an Indian, but that still is better than what Bradley Zimmer, Greg Allen, Domingo Santana, Oscar Mercado and Jordan Luplow have hit this year. It may seem minor, but any improvement for the Indians helps.

Then there’s the strength of the team, the pitching. Before the season, Mike Clevinger was considered the ace of the staff, but with the emergence of Shane Beiber as arguably the best starter in baseball, Clevinger became a tradable asset. Trading Clevinger allowed both Plesac (who has had a 1.32 ERA and a .74 WHIP in 34 innings) and Tristen McKenzie (who has had 2.57 ERA and .76 WHIP in 21 innings) to enter and rejoin the rotation and considering the way they’ve been pitching, great situation. Not to mention adding Cal Quantrill to an already stacked bullpen, who has not pitched great in his small sample size in an Indians uniform, but it is still a solid option to have in the bullpen.