The Guardians fell to the Detroit Tigers 4-2 on Sunday, but the close affair might have had significance for Cleveland for reasons completely outside of the final score.

Namely, manager Terry Francona penciled Josh Naylor into the five spot in the batting order. It was Naylor’s first appearance on the field in nearly two weeks as he returned from a bout with COVID that had recently wreaked havoc with Francona and his coaching staff as well (Naylor was the only player to test positive).

Naylor would return to the lineup with a splash, smashing a solo home run in the 4th inning that sailed over the center-field fence. The round-tripper would be the farthest hit ball of the day, resulting in the trademark exuberance around the bases that the young, left-handed slugger is quickly becoming known for in his time in a Guardians uniform. What made Naylor’s addition to the lineup relevant though isn’t about Naylor’s homer or really only Naylor in any way. It’s about how he fits into the greater whole.

With Naylor’s activation from the COVID Injured List on Friday, every position player on the Guardians 40-man roster is healthy and accounted for. When it comes to the offensive weapons that Francona has at his disposal, he is currently playing with a full deck. Between Naylor and infielders Yu Chang and Owen Miller all having separate bouts with COVID throughout the course of the early season and backup catcher Luke Maile‘s delayed start to the season due to a hamstring injury, the team hadn’t been able to sport such a full deck before Sunday’s contest.

So, this was our first look at what a full-strength Guardians offense might look like. Of course, some things never change. Myles Straw (CF & lead-off), Jose Ramirez (3B & 3rd) and Austin Hedges (C & as low in the order as possible) were in the spots where you would expect them to be.

However, in at least one case a Guardians hitter has only recently returned to his familiar place in the order. Specifically, Francona has moved Amed Rosario back to the 2-spot where he flourished in 2021. Rosario earned the trip back up the ladder in the order after a rough start that included a paltry 54 wRC+ in March and April. To his credit, Rosario has hit .288 in May with a much-improved wRC+ of 110. The move also allows Francona to take some pressure off of rookie outfielder Steven Kwan. Kwan continues to be an intriguing prospect that will always put up good at-bats, but the young outfielder has hit only .185 in May and slugged just a meager .259- both numbers barely more than half of his April production. While he has struggled, his bat-to-ball skills, defense and speed remain top-notch. It stands to reason that he will remain in the order, just in a diminished role down the line. 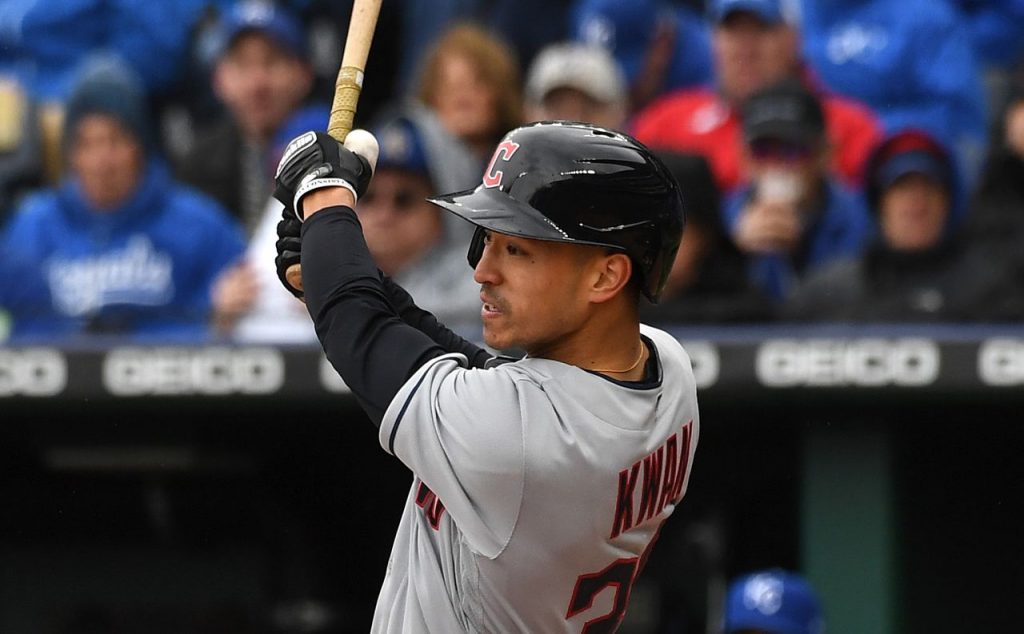 But in order to get Rosario into the lineup while keeping the ascending double-play combination of Andres Gimenez and Owen Miller in the order, the Rosario in left-field experiment may be back on. Rosario played only his fourth game of the season in left on Sunday and he might have to play many more there in order to realize Cleveland’s best lineup. Sunday’s broadcast mentioned that Francona’s likely plan is to play Naylor at first base regularly moving forward. If Naylor is playing first, then Miller isn’t. Miller, for good reason, has hit in the cleanup spot for the Guardians in every game except one since April 27th. He is slugging .514 for the season while being the only Guardian with double-digit doubles, showing vast improvement over a 2021 rookie campaign that saw him struggle to a .309 slugging percentage in a little over 200 plate appearances.

The point here is, that Naylor is playing at first every day and Miller is therefore playing at his natural position of second base every day. Rosario could play his own natural position of shortstop still, but that role is likely covered for the time being by Gimenez. In most major statistical offensive statistical categories, the only Guardian that has hit better than Miller… and isn’t named “Ramirez”… is Gimenez. .310/.327/.530. 148 wRC+. Gimenez has the same batting average as Mike Trout right now and has slugged better than Pete Alonso. He’s knocked the cover off of the ball since starting to get regular playing time on April 20th.

Ironically, coming into the season it felt like Rosario was going to be forced into the outfield in order to keep him in the lineup. The Guardians’ offense would need him that desperately in order to stay afloat. Rather, while Rosario struggled early, Naylor, Miller, Gimenez and Kwan picked up the slack and are now part of an engine (mostly driven by Ramirez, of course) that has the Guardians offense as the best batting average in the American League as well as home to the third most runs per game. And as a reminder, Sunday was the first day that they have all of their players!

They have completely exceeded expectations, despite COVID and despite the fact that Franmil Reyes just hasn’t put it together yet (which opened up the opportunity for Miller and Naylor to hit in the four and five-spots). They might be 17-20 but there is a lot to be optimistic about with a Guardians team that has performed better offensively than expected even with its presumed second-best hitter scuffling at the plate.

Lefties like Naylor, Gimenez and Kwan might not play every single day, but expect to see a steady stream of Straw-Rosario-Ramirez-Miller-Naylor-Reyes-Gimenez-Kwan-Hedges in the coming days. In the modern game, it’s awfully rare to see managers churn out the same lineup day after day, but some sort of facsimile of these guys feels like the Guards’ best lineup right now.

And while it might not feel like the best lineup based on the mere two runs that were scored on Sunday, keep in mind that in a lot of ways the Guardians got robbed in a close, winnable ballgame. Three balls struck between Reyes and Rosario were hit to the wall and caught- balls that probably leave the yard on a warmer summer day. Additionally, the Guardians had six balls put in play that had a better than 50% chance of being base hits (per Statcast) that were turned into outs. They had none that were below 50% and turned into hits. Ultimately, that’s just a semi-scientific way of saying that scoring only two runs was really unlucky and that they were robbed of about six hits on the day.

Not every game will have such misfortune. Tito has all his guys at his disposal and may have the most competitive lineup that he has had in a few seasons. We just got to see it for the first time on Sunday.