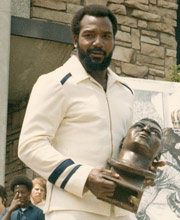 It was an absolute rare side we don’t see from the outspoken NFL legend, the Hall of Fame event felt so cool to witness such humility from Mr. “First Down Brown” himself, as Jim Brown from Manhasset, Long Island, thanked everyone in his life for being able to impact his life to be able to be inducted into the NFL hall of fame.

1957 NFL Draft: Coming from the University of Syracuse, Jim Brown was drafted in the 1st round, at 6th overall draft pick by the Cleveland Browns football franchise.

Key Quote: “Remember that the arrogant, the bad Jim Brown can be humble when he is given true love and when he is able to talk about people that he truly respects. So, thank you very much.” 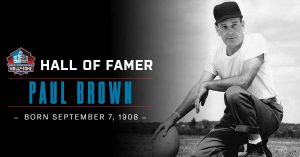 The short, yet passionate speech struck a core around the entire NFL world of 1967. Paul Brown in a humble fashion honored Otto Graham and praised the truth of coaching in the NFL and the football player’s spirit and love for the game. He praised what he’s been coaching for years and made an impactful message while doing so.

Key quote: ”The most pleasant way of life is to have a job you love and I love football coaching. Money is relatively unimportant to me, once I’ve taken care of the comforts of my family.”