The Cleveland Cavaliers have lost one of their assistant coaches today as Lindsay Gottlieb has decided to return to the college ranks, where she had established herself as one of the premier women’s college basketball coaches. Gottlieb agreed to a six-year contract with the University of Southern California to coach their women’s basketball team.

Gottlieb got to the Cavs originally after establishing her career as becoming one of the best women’s basketball coaches in the country. She was at the University of California for eight seasons, before joining the Cavs. Her teams at California made it to the NCAA tournament seven of those years. Her best year with her California team was back in 2012-13 when her Golden Bears went to the Final 4, winning a program-record 32 games. She ended up with a 179-89 record at California.

She now returns to the PAC 12 conference where she’ll take over a decent USC program. USC hasn’t made the NCAA tournament since 2006 so getting Gottlieb to lead their program will certainly reenergize a once-proud women’s basketball program that once won back-to-back championships in 1983 and 1984.

With the departure of Gottlieb, is this an indication that things, behind the scenes, are starting to unravel for the Cavs current coaching staff? Is J.B. Bickerstaff more on the hot seat than we know?

We certainly will find out in due time. But in the meantime good luck to coach Gottlieb! 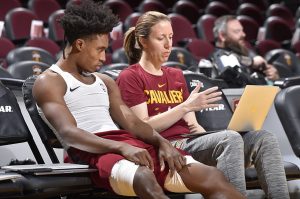