Carlos Gonzalez has been playing pretty well in his first five games as a member of the Tribe. In his 20 at-bats, the 3-time all star, 3-time gold glover, and 2-time silver slugger racked up six hits, a RBI and three runs of his own. He’s doing great at the batter’s box with an even .300 batting average and a .364 on-base percentage, but he can help out in more ways than just his hitting. The Indians need more consistent outfielders and having a stable guy like CarGo back there is a great fit. Not going to lie, I like Bauers, Naquin and occasionally Allen. Then, there’s Carlos, who honestly shows some of them up. He’s the most consistent hitter and a reliable fielder.

CarGo can become a starter and a potential playmaker for the Indians while they add depth to honestly the weakest part of the defense. He’s a good temporary fix for the team right now and who knows how much longer we can keep him and how much longer he can compete in the MLB being 33 years old. The only thing there is to worry about Carlos is the time that we have him and how limited it might be.

Now this could just be me being over-optimistic, but I think this was another great move by Terry Francona. Whether or not we sign him to another deal is something we’ll just have to see how he produces since it’s still really early in the season. 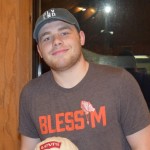