In an abbreviated season in the spring, the Southwestern Athletic Conference championship was on the line. This time there was some faces in the title game that hadn’t been there in a while. Alabama A&M had not won the SWAC since 2006, while Arkansas Pine-Bluff hadn’t won the SWAC since 2012.

Both teams came into the game looking to Prove that the SWAC is more than just Grambling St, Southern and Alcorn State, who combined have won the last seven SWAC football championships.

Pine-Bluff and A&M both came in undefeated in regular-season play. Showing that the phrase “defense wins championships” is still a true statement.

Like any championship game, the first half was very back and forth with the first half ending with a 26-18 score in favor of Pine-Bluff. Things would change in the third quarter as the A&M Bulldogs would come out biting as senior A&M QB Aqeel Glass would throw two touchdowns and RB Gary Quarles would run for another to put the score at 40-26. The Golden Lions would use a 10-play drive to put the score at 40-33 with 2:30 left in the game. The Lions would get the ball back after a punt and drive down but Pine-Bluff QB Skyler Perry would throw an interception in the end-zone to end the game.

For Alabama A&M, this was their second undefeated season in school history and their first SWAC title since 2006 and head coach Connell Maynor added more hardware to his collection as he quoted the “Nature Boy” Ric Flair before receiving his traditional Gatorade bath and SWAC trophy. 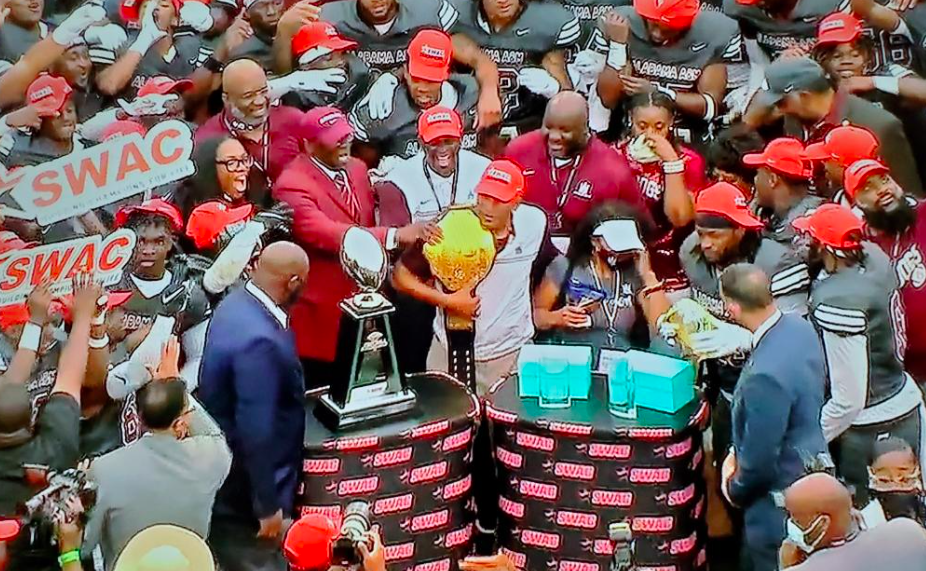 To quote Ric Flair again, ” to be the man, you gotta beat the man!” The question going into the fall will be will the “man” (A&M) stay on top and repeat as SWAC champs and possibly win a Celebration Bowl title?

BET! NFL Cracks Down On Betting By Player