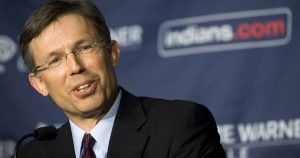 With the fate of this year’s professional sports seasons currently up in the air, sports fans like us are given two choices: we can either look back on the ups and downs of our favorite teams or we can look to the future, as uncertain as it may be. This article seeks to accomplish both of these tasks, recalling the Tribe’s recent past and anticipating their possible future. As fun as the Indians have been recently, the current state of the team has become one of uncertainty and tension as players, fans and the media are met with an undeniable elephant in the room in the form of Francisco Lindor and his expiring contract. Many blame this situation on Indians’ majority owner and CEO Paul Dolan, feeling that he is unwilling to take the necessary measures to bring back his star players. Some defend the team’s ownership, feeling that Lindor’s departure is inevitable as a “small market” like Cleveland cannot compete with the likes of New York and Los Angeles teams, especially in a league with no salary cap. However, taking a closer look at the state of the Indians and the MLB as a whole shows that both of these claims are essentially arguing the same point. The Indians’ disadvantage from being a “small-market” team is a direct result of Paul Dolan’s ineptitude as an owner and his skewed viewpoints on how to maintain fan and player support.

An owner of a professional sports team should have one ultimate goal: for their team to win championships. Paul Dolan’s goal as an owner is not even to make his team “good”, it is to make his team good enough. It is to make his team good enough to keep fans in the stands and watching from their homes, buying season ticket packages and official merchandise and ensuring that, at the end of the day, his own pockets are filled. The most glaring example of this comes from the period preceding the Indians’ disappointing 2019 campaign. In an infamous interview with Zack Meisel, Dolan defended his questionable personnel moves by claiming that the American League Central was a weak division and that the Indians didn’t need as strong of a team to have success in it. Well, in the following season, the Minnesota Twins won 101 games and won the Central by a margin of eight games. The final stretch of the season saw the Indians in a desperate fight for the final Wild Card slot until their season was ultimately ended after the standard 162 games, a far cry from a supposedly easy division crown. Some could argue that this is not necessarily Paul Dolan’s fault as baseball is known for its unpredictable nature and good teams can seemingly appear out of thin air. But, Paul Dolan’s fault arises in the nature of the statement itself, regardless of the outcome. Simply making it to the postseason should not be viewed as a success, especially for a team that came within just one game of a World Series title in 2016. Championships are not won by building a team that is just good enough to win the division. No player ever made it to the majors by letting themselves be good enough to compete in triple-A. Nevertheless, the Indians are operated by a philosophy that values momentary flashes of success and, in recent years, the team’s play reflects just that.

The Dolan family purchased the Cleveland Indians in 2000 following the team’s legendary run in the 1990’s. The following year saw the Indians reach the playoffs before a five-year stretch (2002-2006) of zero playoff appearances and only one season above .500. Playoffs came once again in 2007, when the Terry Francona-led Red Sox beat the Tribe in seven games in the ALCS en route to a World Series title of their own. Four more years of mediocrity followed with zero playoff appearances. We then saw a fun 2013 campaign where the team made it to the Wild Card game, losing to the Tampa Bay Rays. Next followed two more years of (you guessed it!) no playoffs for Cleveland. Then, 2016-2018 saw the Indians win the division three straight years and reach the World Series in 2016 for the first time in nearly twenty years. Coming off this stretch of divisional dominance and possessing a slew of young talent and one of the most dominant pitching rotations in baseball, the Indians were a few pieces away from becoming the league’s next dynasty. Instead, Paul Dolan chose to cut the team’s payroll (followed by his “weak division” comments) and the Indians fell short of the playoffs in 2019, as discussed above, thus contributing to the sine-curve that has been Cleveland baseball in the 21st century. The team succeeds for a few years, the fans get hope, then the team responds with a few years of sub-.500 seasons and the cycle continues.

This trend reflects both the Indians’ successes in scouting as well as their failures in ownership. The teams’ successes have come from their profound ability to raise great prospects. In recent years, the Indians have seen position players like Francisco Lindor, Jose Ramirez, Roberto Perez, Bradley Zimmer, and others rise through the minor leagues and become consistent contributors, with players like Lindor and Ramirez even being top-five players at their position. Not to mention pitchers like Corey Kluber, Mike Clevinger, and Shane Bieber who contributed to the Indians’ dominant rotation during their three-year stretch of division titles. The Indians have fantastic scouting, so it seems that consistent success should come as a result of that. But, Dolan has shown that he is unwilling to spend the money to keep a roster together, despite the success it created. Michael Brantley, one of the team’s most consistent hitters and a perennial fan favorite, was let walk in 2018, signing with the Houston Astros and proceeding to hit .311 with 90 RBIs in his first season with the team. The Indians replaced Brantley with Jake Bauers, a discount player who hit a mere .226 in 2019 and drifted between triple-A and the Major Leagues. The team has also acquired star players through trades several times in recent years, with players like Andrew Miller, Josh Donaldson, and Yasiel Puig all being added to the Indians through trades in the past five seasons. None of those three players are still on the Indians today, as they moved on after their contracts expired. Donaldson and Puig proved to be no more than rented players, as they didn’t even last a full season with the team. Every time this situation occurs, Paul Dolan plays the “small-market” card, claiming that the team simply doesn’t have enough money to reach agreements with these star players. His focus is not to put together the best team possible; it is to put together the cheapest team possible while still keeping fans engaged. The same situation is playing out with Francisco Lindor, as Dolan refuses to give him the money he deserves as a top young player in all of baseball. Whether Paul Dolan has the money and is not willing to spend it or simply doesn’t have the money at all, it is a clear indicator of his inability to operate a professional sports team. The small-market excuse is a self-fulfilling prophecy, as the market will never grow if the team cannot put out a consistent product. In professional sports, one must spend money to earn money, paying for the best possible players in order to make the most successful team and fill the stadium.

The situation with Francisco Lindor simply affirms Dolan’s ineptitude as an owner and shows the severe faults in his philosophy as a Major League executive. The league is changing and the amount of money required to bring in star talent is rising by the year. Ten years ago, a $300 million contract would have been unheard of. Today, it is commonplace. For the Indians to survive, Paul Dolan must either adapt to the new demands of the league or sell the team to someone who will. Until then, the Indians will suffer, trapped in a never ending cycle with the flashes of success likely becoming few and far between.

After three quarters, the Browns lead 24-13 and have the ball driving!!!!

Browns Vs. Jaguars, Why Am I Watching?