In a rematch of the 2018 Big 10 title game, the Buckeyes came in not playing a game since destroying the Spartans up in East Lansing back on December 5th. Even with missing the TTUN game and still missing players due to injury, the Buckeyes showed grit and determination to make it not only to the Big 10 title game but to also secure their spot in the College Football Playoff.

The game didn’t start as we thought it would as Northwestern would keep the Buckeyes out of the endzone and hold them to a field goal and would take the lead 7-3 in the first quarter. Going into this game it was no secret that Northwestern’s defense had carried them to the conference title game. They also proved why they belonged there this year being the only conference opponent to keep the Buckeyes out of the endzone in the first quarter as well as the first half with a 10-6 lead going into halftime.

The second half would prove different as the Buckeyes would make the necessary adjustments to secure the win. Once again the Northwestern defense would cause more chaos as they forced Buckeye QB Justin Fields to throw two interceptions and hold him to 114 yards passing. With all things in football, if you stop one aspect of a team you still have to deal with the other. This also spelled bad news for the Wildcats as Buckeye RB Trey Sermon would run a rough shot over the Wildcat defense in what would turn out to be a record day for him. The Buckeyes offensive line would open holes for Sermon to run through the entire second half. This would happen often early in the third quarter and would prove fruitful when Sermon would score his first TD on a nine-yard run. In the fourth quarter, the Buckeyes would tack on a field goal and ground and pound the Wildcats continuously. Sermon would score again on another three-yard run even after a failed two-point conversion. 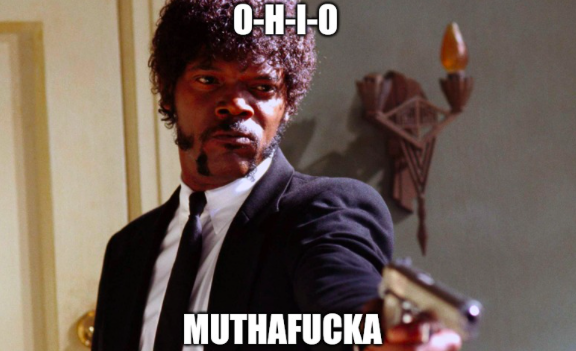 What’s so special about the particular conference title game is that the Buckeyes leaned on the ground game and racked up 399 total rushing yards. An even more staggering stat is that the anchor of that rushing attack Trey Sermon ran himself in the record books. Back on November 11th, 1995 Buckeye great and Heisman Trophy winner Eddie George would completely destroy the Fighting Illini defense in what would be a day in which he would rush for 314 yards and three total TD’s. That record would stand for 25 years. Buckeye RB Trey Sermon would shatter that record by rushing for 331 yards and two TD’s. Not only is that the new ALL-Time Buckeye single-game record, but that’s also the most rushing yards in Big 10 title game history. What’s even more impressive and scarier than that is that Trey Sermon’s 331 rushing yards are the MOST rushing yards in ANY conference title game, in ANY conference, in football bowl subdivision (FBS) history!!

With this win, the Buckeyes win their 39th Big 10 title, their 4th straight and will likely keep their spot in the college football playoff. The playoff match-ups remain to be seen, but for now, Buckeye fans all over can celebrate as the Buckeyes continue dominance over the Big 10…  O-H…I-O!!