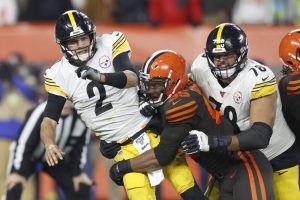 What a better way than in front of an angry home crowd of Chiefs fans for these two Browns, DE Myles Garrett and Jadeveon Clowney, to get their careers started together. They both have been dominating at different times in their careers. To bring them together as teammates should be special.

No more double teams on Garrett with Clowney now on the other end of that defensive line. If Garrett and Clowney make a splash, as I expect they do in a week against the Chiefs, then the Browns have an excellent chance at picking up the win.

With the emergence too of defensive linemen like Malik McDowell, who’s been pushing his opponents around like they’re JV players on a high school team and a more experienced and faster back end of the defense, I fully foresee Garrett and Clowney getting many sacks on the season. That starts Sunday against the Chiefs.