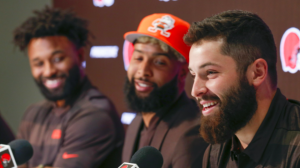 After the devastating injury, Beckham suffered a year ago, he is out for revenge on all those that think he’s an over-hyped diva. Beckham helped the Browns win several games a year ago before his injury. This game against the Chiefs will be in the national spotlight and Beckham has thrived in those moments in the past.

Look out for Beckham and Mayfield to get started quickly and often. I’ve debated on this issue because of the injury, but I just get the feeling that there will be fireworks between the two in this game.

Beckham hasn’t had a solid season in a while and hasn’t had even had a 10 touchdown season since he used to play for the New York Giants.

Look for Beckham to grab two touchdowns in this big game.