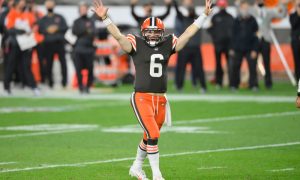 Let’s begin with Browns quarterback Baker Mayfield. The franchise quarterback continues to mature and grow as a leader of the Browns. I fully expect to see record-breaking numbers for Mayfield as he moves through the season. His first three seasons have been impressive. Just the fact that he’s entering the season as the starter in his fourth season with the Browns is impressive in itself because we haven’t had a quarterback start at least three consecutive seasons since Bernie Kosar.

Mayfield has thrown for over 3500 yards in each of his first three seasons. If he does that again, he’ll be in rare NFL company such as Peyton Manning. I see him throwing for over 4,000 yards this season and through 35 or more touchdowns.

For game one, I think the Browns are going to air it out early and I believe Mayfield and his teammates will score quickly.

Mayfield has had a good training camp and with the entire offensive team and his lineman returning, I believe his confidence is at an all-time high and when Mayfield is confident then watch out.